Nanoscale magnetic skyrmions are good candidates for data manipulation and storage in spintronic applications (logic and/or memory). M. Schott et al. have recently shown that a gate voltage can nucleate or annihilate skyrmions. This proof of concept of a skyrmion switch paves the way towards skyrmion-based applications.

Skyrmions are chiral magnetic bubbles: their magnetic texture, or topology, is peculiar since magnetization follows a cycloid along a line across the skyrmion (see dotted line in inset of fig.1). Such topology results from the presence of an interfacial interaction called Dzyaloskinskii-Moriya interaction (DMI). It is due to the asymmetry of the heavy metal/ferromagnet/oxide trilayers studied here. This DMI makes the skyrmions stable, less sensitive to defects than usual domain walls and easily moveable by electrical current. They are currently very popular as they could be used as storage nanoscale data bits that could be very dense, with low power manipulation; they could also be used for magnetic logic with efficient operation. Their creation and erasing with simple, local and low power means are thus important milestones for applications. 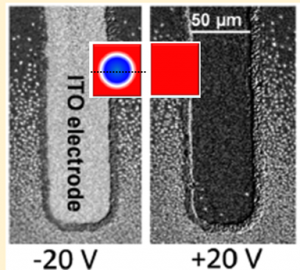 This study, published in Nanoletters, arises from the collaboration of teams from Néel Institute and Spintec Laboratory in Grenoble. In trilayers composed of a heavy metal (Platinum), an ultra-thin ferromagnet (Cobalt) and an insulating oxide (Alumina), they have shown that the size and density of magnetic skyrmions can be modulated by a gate voltage. Finally they have even managed to create and erase skyrmions with the voltage, thus demonstrating a skyrmion switch device operation. These measurements were done at room temperature with materials compatible with electronics. It thus leads to sizeable advances not only in understanding of these magnetic skyrmions but also for their future use in a device.

In this study, the skyrmions are micron-sized. The next step will consist in studying smaller skyrmions, typically in the 10 nm range. In fact, smaller skyrmions would be more suited for application purposes, but they would also be more difficult to observe.

This work has been done by teams from Néel Institute and Spintec Laboratory in Grenoble and was partly funded by the French Research Agency via the project ANR ELECSPIN (ANR-16-CE24-0018).
For more details:
• « The skyrmion switch: turning magnetic bubbles on and off with an electric field » M. Schott et al. Nanoletters, 17, 3006 (2017)
• « Skyrmion on the tracks », A. Fert et al., Nature Nanotechnology, 8, 152 (2016)