We have created an analytical model of spin waves in microscopic spin-wave waveguides in the presence of interfacial Dzyaloshinskii-Moriya interaction. By comparing to micromagnetic simulations, we have demonstrated that spatially periodic excitation sources can be used to create a uni-directional spin-wave-emission source whose properties can be predicted by our model. 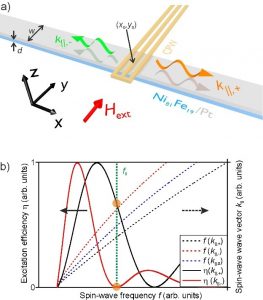 (a) Schematic of the analyzed microscopic spin-wave waveguide, in this study assumed to be made from a thin layer of permalloy (Py, Ni81Fe19) in contact with Pt, and the coplanar waveguide (CPW) acting as spin-wave excitation source. (b) Schematic of the uni-directional emission: The interfacial Dzyaloshinskii-Moriya interaction splits the spin-wave dispersion (dashed lines) of waves running to the left and waves running to the right. In combination with the periodicity of the excitation spectrum by the coplanar waveguide (solid lines), this can be used to achieve an efficient spin-wave emission in only one propagation direction at a desired operation frequency (dashed vertical line).

Since miniaturization of CMOS devices becomes increasingly difficult due to fundamental limitations and the increase of leakage currents, large research efforts are devoted to find alternative concepts that allow for a larger data-density and lower power consumption than conventional semiconductor approaches. Spin waves have been identified as a potential technology that can outperform CMOS in complex logic applications, profiting from the fact that spin waves enable wave computing on the nano-scale. These waves are the low energy excitation of a magnetic material, resulting from a small, local distortion of the magnetic order. Once excited, for example by a local magnetic field, they can convey their information along the magnetic material in form of their amplitude and phase. Submicrometer wavelengths in the GHz to THz frequency range, their easy integration on a chip and their compatibility with non-volatile magnetic memories make them an interesting alternative to other wave-based quasi-particle approaches, such as photonics.

In our work, we study the impact of interfacial Dzyaloshinskii-Moriya interaction, an asymmetric exchange interaction that can be present in ultrathin layer systems with an asymmetric stacking order, on the spin-wave excitation and propagation in microscopic spin-wave waveguides by an analytical model and micromagnetic simulations. We identify the impact of the Dzyaloshinskii-Moriya interaction on the spin-wave frequency, lifetime and the ellipticity of the magnetization precession, as well as on the excitation of spin waves by periodic excitation sources. Such sources, like microscopic coplanar waveguides, provide a certain wave-vector spectrum for the spin-wave excitation which is determined by their dimensions. Together with the lifting of the degeneracy of the dispersion of spin waves propagating in opposite directions, this allows for a controlled spin-wave emission in a desired direction. Our model allows to predict the size of the microscopic spin-wave excitation source in order to achieve optimum emission conditions at a desired spin-wave wavelength and frequency.