We report on the wave-vector independent detection of short-waved spin waves with wavelengths down to 150 nm by the inverse spin Hall effect in spin-wave waveguides made from CMOS-compatible sputtered Ta/CoFeB/MgO. These findings open up the path for miniaturized scalable interconnects between spin waves and CMOS, and the use of ultrathin films made from standard spintronic materials in magnonics.

The miniaturization of CMOS devices becomes increasingly difficult due to fundamental limitations and the increase of leakage currents. Large research efforts are devoted to find alternative concepts that allow for a larger data-density and lower power consumption than conventional semiconductor approaches. Spin waves have been identified as a potential technology that can complement and outperform CMOS in complex logic applications, as they enable wave computing on the nanoscale. The practical application of spin waves, however, requires the demonstration of scalable, CMOS compatible spin-wave detection schemes in material systems compatible with standard spintronics as well as semiconductor circuitry.

Ta/Co8Fe72B20/MgO, typically used in STT-MRAM are patterned as rectangular SWWs. The SWWs are connected to leads at their edges, which allow for the detection of the rectified voltage arising from the propagating spin waves, using the inverse spin Hall effect (iSHE). On top of the SWWs, CPWs of different sizes have been structured to create a dynamic Oersted field which excites propagating spin waves with different and well-defined finite wave vectors in the SWW with in-plane anisotropy.

We show that down to wavelengths of λ ≈ 150 nm the detection by the iSHE is independent of the spin-wave wavelength. By performing additional measurements using microfocused Brillouin light scattering spectroscopy, we show that the excitation is indeed local and, consequently, the iSHE allows for the detection of localized spin-wave dynamics. Thus, the iSHE can be used to detect information transport by short-waved spin waves.

In addition, we have demonstrated that despite the presence of interfacial damping, the spin-wave lifetime in Ta/CoFeB/MgO is comparable to the one in thicker films of commonly used magnonic materials such as Ni81Fe19. This is attributed to the large perpendicular magnetic anisotropy, which also results in a strongly preferred emission direction by the CPW. The additional large reported current-induced spin orbit torques in this material system, render it a highly promising system for magnonic applications.
These findings open up the path for miniaturized scalable interconnects between spin waves and CMOS and the use of ultrathin films made from standard spintronic materials in magnonics. 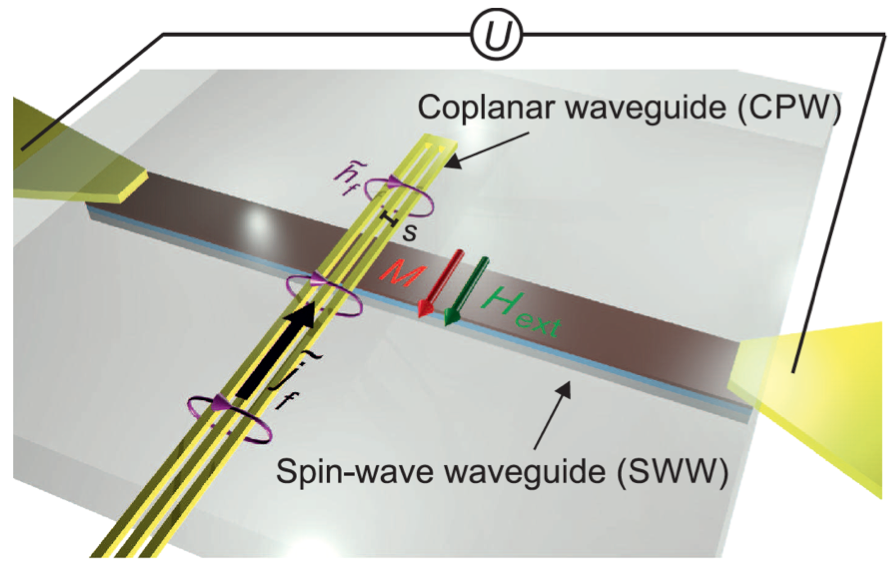