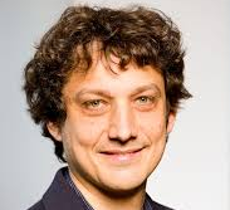 On november 28, We have the pleasure to welcome Bertrand Dupé from INSPIRE Group, Institute of Physics, Johannes Gutenberg University Mainz, Germany. He will give us a seminar at 11:00, CEA/Spintec, Bat. 1005, room 434A entitled :

Surfaces and interfaces can host a wide range of physical phenomena: changes of chemical potential or hybridization can induce large spin orbit coupling, the breaking of inversion symmetry allows the emergence of new transport properties or new interactions. One of these interactions is the Dzyaloshinskii-Moriya (DMI) interaction. The DMI stabilizes chiral non-collinear magnetic textures such as domain-walls or skyrmions which can be manipulated efficiently by electrical currents [1].
Due to their unique dynamic properties, skyrmions offer attractive perspectives for future spintronic applications [1]. Skyrmions can be stabilized at surfaces, interfaces [2,3] and in multilayers at room temperature [4,5].
Here, we show that density functional theory can be used to accurately describe the stability and the dynamics of skyrmions. We explore the different stabilization mechanism of skyrmions in ultra-thin-film and multilayers [3,4]. In particular, we show that the competition between the Heisenberg exchange beyond first nearest neighbor and the DM interactions are crucial to describe equilibrium and dynamic properties of skyrmions. Like in a spin glass, such competition results in a frustrated ground state [6,7] which may exhibit higher order skyrmionic states [8,9].
Finally, we focus on the dynamics of skyrmions and antiskyrmions under spin orbit torque. Conterintuitively, we show that their dynamics are not driven by their respective topological charge but rather by the symmetry of the DMI as well as the deformation of their core [10].