More and more portable consumer devices such as for example watches, mobile phones or GPS use an electronic compass to position the device in space. These 3 axis (3D) magnetometers measure the amplitude and the direction of the magnetic field. In all the application fields, it is needed to have magnetic sensors which are more and more sensitive, less consuming and smaller. Current technologies are based on magneto-resistive (MR) sensors. The MR sensors individually have a large sensitivity but manufacturing 3D magnetometer requires assembling at least two non-coplanar sensors. This leads to a hybrid device, expensive to produce, large and, more importantly, presenting a limited resolution due to systematic errors in the assembling. Moreover, the MR sensors are characterized by an intrinsic thermal drift, which is actually compensated by complex configurations using differential measurements.

We proposed and patented recently a completely integrated 3D magnetometer providing an innovative solution to these problems. In the proposed magnetometer, the three components of the magnetic field are derived simultaneously by several magneto-resistive sensors integrated on the same substrate on crystalline planes of controlled orientation (Fig.1). Having sensors with the same intrinsic sensitivity, resolution and thermal drift allows to significantly simplifying the compensation of the sensor response drifts as the initialization of the individual sensors is not required anymore. As a consequence, the power consumption of the sensor is dramatically reduced. Beside a much simpler and less expensive manufacturing process, this type of magnetometer offers greater compactness and a greater sensitivity.

The practical realization of the proposed compass is based on the use of the anisotropic etching of a substrate, which allows defining 4 plans tilted at very precise angles. For example, by using Si (100) substrate etched in a KOH solution, the obtained pyramid is delimited by (111) plans of the Si substrate at a perfectly defined 54,7° angle with respect to the surface of the substrate. Optimized spin-valve magnetic stacks are therefore deposited. 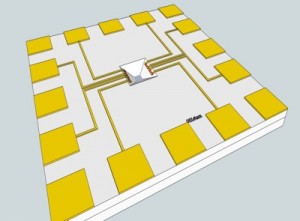 A resist « spray coating » process is used to lithographically define the individual sensors and the electrical contacts, while the magnetic sensors are etched by ion beam etching. On the final device obtained after processing, the 3 local components of the magnetic field are derived from the voltages measured across the 4 sensors placed on the 4 sides of the pyramidal substrate.

Helmholtz coils have been used for the functional test of the sensors, producing rotating magnetic fields along 3 spatial directions. As shown in Fig.2 left, the sensor individual response for magnetic fields as low as 0.5Oe (equivalent to earth magnetic field) indicate that we are able to determine the orientation of the field with a precision lower than 2°. Moreover, the configuration of our structure allows removing the thermal drift of the sensors offset. This drift determines for example a difference in the resistance of an individual sensor measured either at 0° or at 360° as seen in Fig.2, left. In order to intrinsically compensate the offsets, the final device contains 2 sensors on each plan of the pyramid and Wheatstone bridges are made between sensors located on opposite sides of the pyramid – Fig.2, right.

In order to fully exploit the main advantages of our new concept of magnetic sensor over existing magnetic sensors on the market, there are some requisitory improvements actually addressed: ensuring homogeneous magnetic properties on the 4 sides of the pyramid and an orthogonal alignment between the sense and the reference layers of the spin-valve magnetic stack. With these aspects validated in the framework of a maturation project, the next step will be either the technological transfer to an industrial partner or the creation of a new start-up exploiting this new concept of integrated monolithic 3D magnetic compass.

Fig. 2 Left : Response of individual sensors for an applied rotating magnetic field of 0.5Oe. Right: Removal of the thermal drift by using Wheatsone bridges between sensors located on opposite sides of the pyramid   .