On August 31, we have the pleasure to welcome Coriolan Tiusan prof. a 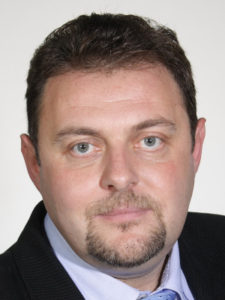 t Univ. Cluj-Napoca, ROMANIA and Senior Researcher at Institute Jean-Lamour, Nancy. He will give us a seminar which will take place at SPINTEC 434A at 9:30.

The presentation will cover some current issues specific to single crystal MTJs and perpendicular magnetization controlled by interface proximity effects.

In a first section, the exchange magnetic coupling between Fe electrodes through a thin MgO interlayer in epitaxial junction is revisited. Our investigation focuses on systems where we tuned the MgO barrier thickness and the interface quality. Depending on the MgO thickness, opposite temperature variation of coupling has been revealed. For extremely thin MgO the main component decreases with the temperature indicating a metallic-like behavior. For large MgO thickness the coupling exponentially increases with the temperature. Insertion of monoatomic roughness at the bottom MgO interface exacerbates metallic-like features and oscillatory from antiferromagnetic to ferromagnetic behavior is observed. Our results indicate that the transport mechanism usually employed to explain the coupling across MgO is rather complex. A crossover behavior of MgO spacer from metallic to insulating when increasing thickness must be considered.

The second part of the presentation will cover our preliminary results concerning the E-field manipulation of magnetic anisotropy. The studies are based on magneto-transport experiments on planar Hall-cross type spintronic devices patterned by UV-lithography and ion beam etching. Several innovative multilayer architectures have been considered. They are roughly based on Co ultrathin layers sandwiched between a Pt buffer and a top MgO barrier, grown by UHV-sputtering on thermally oxidized Si wavers. A special device design geometry should allow the applying of a tunable external electric field across the MgO layer at the top interface Co/MgO. Therefore, the E-field influence on the surface anisotropy and PMA could be studied using Hall magnetometry technique in a temperature range from 2-300K. Current technical problems encountered are discussed together with perspective issues for mitigating the blocking points.