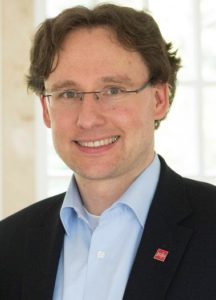 On June 19th at 11:00, Mathias Klaui from Johannes Gutenberg-University Mainz, Germany will give us an IEEE Distinguished Lecture (*)
the seminar will take place by video-conference. Contact for the link :  adriana-gabriela.stoenescu@cea.fr

With information technology consuming a sizeable part of the total energy, “GreenIT” information storage and computing technology will have a major impact to address societal challenges.

Traditionally, magnetism has been the prime approach to non-volatile data storage and spintronics devices for memory and sensing have been realized. However so far, spintronics is linked inextricably to ferromagnets in metals entailing major disadvantages, such as ohmic losses during operation and unwanted interactions due to stray fields. A possible novel approach is to use antiferomagnets. While known for a long time, antiferromagnetically ordered systems have previously been considered, as expressed by Louis Néel in his Nobel Prize Lecture, to be “interesting but useless”.

However, since antiferromagnets potentially promises faster operation, enhanced stability with respect to interfering magnetic fields and higher integration due to the absence of dipolar coupling, they could potentially become a game changer for new spintronic devices.

Mathias Kläui is professor of physics at Johannes Gutenberg-University Mainz and adjunct professor at the Norwegian University of Science and Technology. He received his PhD at the University of Cambridge, after which he joined the IBM Research Labs in Zürich. He was a junior group leader at the University of Konstanz and then became associate professor in a joint appointment between the EPFL and the PSI in Switzerland before moving to Mainz. His research focuses on nanomagnetism and spin dynamics on the nanoscale in new materials. His research covers from blue sky fundamental science to applied projects with major industrial partners. He has published more than 260 articles and given more than 200 invited talks. He is a Senior member of the IEEE and has been elected to the technical and administrative committees of the magnetics society. He is also a Fellow of the IOP and has been awarded a number of prizes and scholarships.