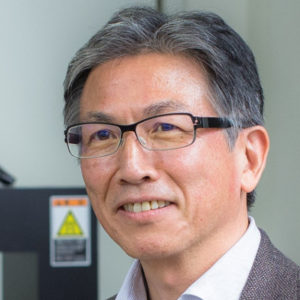 On Thursday, October 7th at 15:30 YoshiChika Otani (*), from University of Tokyo will give us a seminar entitled:
Functional topological antiferromagnet

Abstract: Chiral antiferromagnets Mn3X (X=Sn and Ge) exhibit significant magnetoelectric, thermoelectric, and optical responses such as anomalous Hall effect (AHE), anomalous Nernst effect (ANE), and magneto-optical Kerr effect (MOKE); their magnitudes reach almost the same as those of ferromagnetic metals. These characteristic properties of Mn3X imply that the spin Hall effect (SHE) could also occur. Our recent study demonstrated that a novel type of contribution to the SHE (magnetic SHE, MSHE) and the inverse SHE (MISHE) absent in nonmagnetic materials could be dominant in the antiferromagnets, Mn3X. We attribute this dominant magnetic mechanism to the momentum-dependent spin splitting produced by the noncollinear magnetic order, i.e., the cluster magnetic octupole (CMOP), comprising two sets of three spin sublattices. Moreover, the cluster magnetic octupole takes ferroic order on the Kagome lattice, macroscopically breaking the time-reversal symmetry. Previous studies also revealed that the cluster magnetic octupole, not the magnetic dipole, plays an essential role as the magnetic order parameter for antiferromagnetic domains and domain walls.
In the first half of this talk, we will introduce our recent experimental results on the magnetic spin Hall effects (MSHE), particularly angular dependent spin densities appearing on the surface of a focused ion beam fabricated Mn3Sn epitaxial thin slab. We will discuss the new functionality for magnetic manipulation we could obtain from the MSHE. In the second half, we will discuss the electrical nucleation, displacement, and detection of antiferromagnetic domain walls (AFDWs) consisting of the CMOPs. We will also show some of our recent MOKE measurements for Mn3Ge to discuss the magnetic domain structures. Our findings could provide a guiding principle for engineering the AFDW structure in chiral antiferromagnetic materials.

Short CV : YoshiChika Otani received the B.S., M.S., and Ph.D. degrees from Keio University, Japan, in 1984, 1986, and 1989. He was a research fellow at the Physics Department of Trinity College Dublin, the University of Dublin, Ireland (1989–1991), and a researcher at the Laboratoire Louis Néel, CNRS, France (1991–1992). He was an assistant professor at the Department of Physics, Keio University (1992–1995) and an associate professor at the Department of Materials Science, Tohoku University (1995–2002). In 2001-2004 he led the Quantum Nano-Scale Magnetics Research Team at the RIKEN Frontier Research System (FRS) as a team leader. In 2004 he became a professor at the Institute for Solid State Physics (ISSP), the University of Tokyo. Since 2004 he has also been the Quantum Nano-Scale Magnetism Research Team leader at the RIKEN Center for Emergent Matter Science (CEMS).
Prof. Otani has published over 250 technical articles in peer-reviewed journals, including book chapters and review articles, and has given more than 100 invited and plenary presentations at international conferences. He has been coordinating the Nano Spin Conversion Science project, supported by the Japanese Ministry of Education, Culture, Sports, Science, and Technology since 2014 to elucidate the interconversion mechanisms among phonons, photons, magnons, and electrons. He has served as an IEEE distinguished lecturer in 2018. He has also been a committee member of the Commission on Magnetism (C9) of the International Union of Pure and Applied Physics since 2011 and will become vice chair in 2018.