Spin-transport in antiferromagnets from the GHz to THz regime 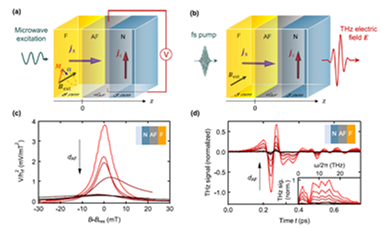 Schematics of the two techniques for measuring spin-transport in the GHz and THz regime, and corresponding raw signals.

Control over spin transport in antiferromagnetic systems is essential for future spintronic applications with operational speeds extending to ultrafast time scales. A consortium of physicists at SPINTEC, JGU Berlin and Charles University Prague established the essential role of interfaces for spin current injection and spin current-to-charge current conversion, from the gigahertz (GHz) diffusive to the terahertz (THz) ballistic regime. This work therefore opens the door for optimization of the spin control at ultrafast time scales.

Control over spin transport in antiferromagnetic systems is therefore essential for future spintronic applications with operational speeds extending to ultrafast time scales. Here, we study the transition from the GHz to THz regime of spin transport and spin-to-charge current conversion in the prototypical antiferromagnet IrMn by employing spin pumping and THz spectroscopy techniques. We have shown that the ultrafast spin injection and conversion in IrMn are operative up to ~30 THz and currently limited by the pump pulse duration and detection bandwidth. The upper bound of the spin-to-charge conversion efficiency in IrMn, amounts to roughly 10% of the conversion in Pt. The direct comparison of the THz to GHz regimes revealed that the characteristic length of the spin transport is four times larger at GHz frequencies, ~2 nm. As the underlying mechanism, we suggest a dominating ballistic electron transport in the THz regime, compared to an electronic diffusive transport in the GHz regime mixed with an eventual magnonic contribution. We also showed that contributions of the interfaces to the spin-to-charge current conversion can be significant and even can dominate the other conversion processes in the THz regime, thus making it useful in optimizing and engineering the ultrafast spintronic functionalities in antiferromagnets.