Two-dimensional materials like graphene or transition metal dichalcogenides (TMDs) have attracted a lot of attention during the last decade for their original electronic properties intimately related to their 2D character and symmetries. At Spintec, the “2D spintronics” team develops the molecular beam epitaxy of TMDs for spintronics and has recently succeeded in growing a new Janus monolayer of SPtSe. This new material associating high spin-orbit coupling and low symmetry might contribute to improve the writing-reading efficiency of magnetic memories.

The goal of this study is to exploit the Rashba spin-orbit coupling in two-dimensional materials for the development of a new generation of SOT-MRAM made of van der Waals materials. Considering TMDs, we selected PtSe2 for the large spin-orbit interaction induced by platinum atoms. However, the main obstacle to reach high Rashba spin-orbit coupling comes from the mirror symmetry of PtSe2 with respect to the Pt atomic plane leading to the absence of vertical electric dipole and field. In collaboration with IRIG-MEM, we have broken this mirror symmetry by substituting only the top layer of Se atoms by S atoms to form a so-called Janus SPtSe monolayer after the biface Roman God. This selective substitution generates a vertical electric dipole and potentially a very strong Rashba spin-orbit coupling. 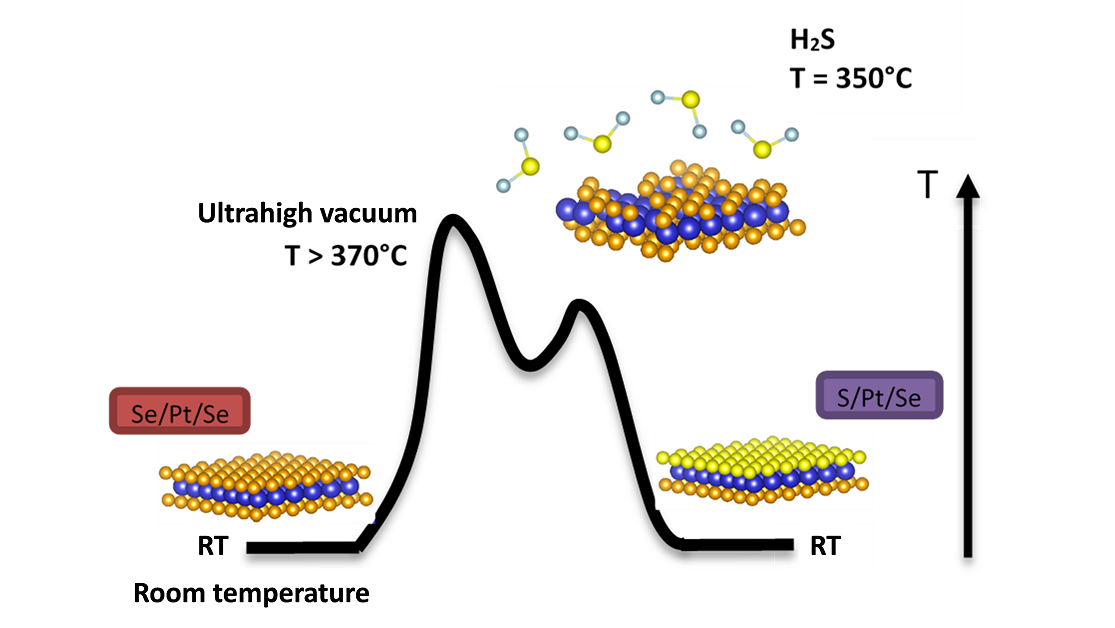 Schematics of the process by which the top Se layer was selectively substituted by S atoms to form the Janus compound.

The parent compound was one monolayer of PtSe2 epitaxially grown on a platinum single crystal by self-limited selenization of the Pt. The final compound SPtSe was then synthesized by substituting the Se atoms in the top layer by S atoms using a well-controlled sulphurization process under H2S atmosphere. It proceeded in two steps observed in situ and operando by grazing incidence x-ray diffraction at the European Synchrotron Radiation Facility (ESRF, beamline BM32). First, the PtSe2 layer was annealed in ultrahigh vacuum up to 370°C. At this temperature, the PtSe2 monolayer started degrading and some Pt-Se bonds were broken mostly in the top layer. However Se atoms stayed at the sample surface probably forming a “liquid” phase. In the second step, H2S was introduced in the chamber and the presence of Pt catalyzed the H2S molecules dissociation allowing S atoms to substitute Se ones. The whole process is schematically shown in the figure. The final atomic composition of the biface Janus monolayer was then checked ex situ by angle resolved x-ray photoemission spectroscopy.

This is the first time this type of Janus compound could be synthesized and SPtSe, with large Rashba spin-orbit coupling, has great potential in the fields of magnetic and ferroelectric memories.