A full hybrid magnetic/CMOS System on Chip (SoC), embedding analog and digital functions based on spintronics devices on the same die, has been designed and sent to manufacturing. It is the first demonstrator of such a circuit worldwide. 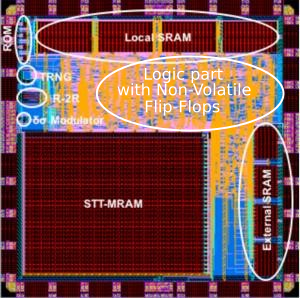 Spintronics, which aims at using magnetic devices beside standard CMOS transistors, has been intensively studied for several years as a solution to contribute to push forward the incoming limits in microelectronics scaling. It is now seen as one of the most promising emerging non-volatile technologies and is on the way to becoming a mainstream technology for most of the microelectronics players. A specificity of this technology is that magnetic devices (MTJs for Magnetic Tunnel Junctions) allow performing analog functions, like sensing or RF communication in addition to the standard memory function. Being able to integrate all these functions in a same die (SoC for System on Chip) would allow drastically simplifying the process (reducing the cost) and reducing the power consumption. This is particularly interesting for IoT (Internet of Things) applications, were smart communicating objects has to operate in energy constraint environments, at very low-cost.
In 2015, the EU launched the GREAT project (for heteroGeneous integRated magnetic tEchnology using multifonctionnal stAndardized sTack), with an aim to co-integrate multiple functions like sensors, RF receivers and logic/memory together within CMOS by adapting MTJs to a single baseline technology (MSS for Multifunctional Standardized Stack) in the same SoC. The main objectives of the project are to develop the MSS devices, co-integrate them with standard CMOS in a full hybrid process, design elementary functions based on this MSS and integrate them in a full SoC to run a pertinent application and evaluate the gain compared to standard approaches.
A first demonstrator delivered in 2017, embedded mainly test structures and elementary logic circuits. Partners announced that the second demonstrator is now under manufacturing using the hybrid CMOS/MSS technology of TowerJazz. The project partners designed in particular an ultra-low power “normally off” microcontroller, based on a 32-bit non-volatile processor core with several features. A non-volatile flip flop, a non-volatile controller with Instant on-off capabilities using efficient wake-up and backup recovery operations thanks to the non-volatility are part of this SoC. Moreover, an SRAM and MSS-based memories, secure block based on the MSS stack (cryptographic keys generation) and a set of Analog IP block were integrated to this ASIC.
The next phase of the project will consist in testing the demonstrator and in characterizing the hybrid CMOS/MSS process. Results are expected by the second quarter of 2019.