Bernard Dieny from INAC/SPINTEC received the thematic Prize « Adrien Constantin de Magny » for his research in nanomagnetism and spin-electronics. His research results already found applications in hard disk drives used in computers as well as magnetic memories and should allow the development of very low power electronic circuits in the near future. 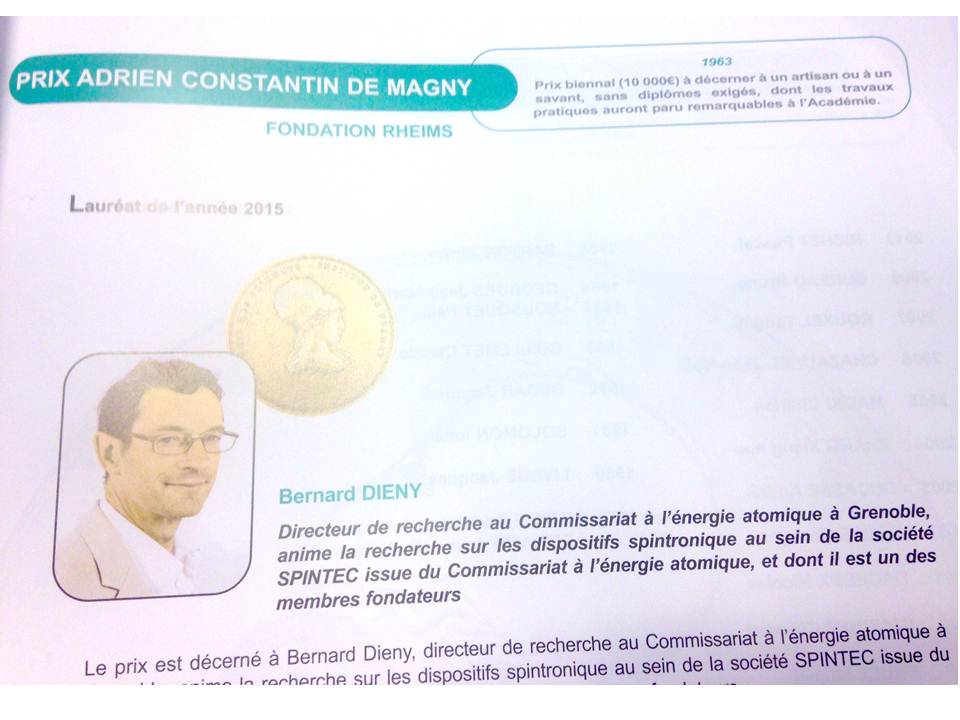 Bernard Dieny graduated from Ecole Normale Supérieure de Cachan and received his PhD from Grenoble University. His expertise is in the field of nanomagnetism and spin-electronics. He spent most of his carrier in CEA/Grenoble, Institut des Nanosciences et Cyrogénie (INAC) with two long stays abroad, one at IBM Almaden Research Centre in California (1990, 1991) the other at University California San Diego (UCSD, 1996) : Soon after his PhD, he developed very sensitive magnetic field sensors based on Giant Magnetoresistance called “spin-valves”. These structures were introduced by IBM in computer hard disk drives in 1998. In 2001, B.Dieny cofounded SPINTEC, a public research laboratory focused on spin-electronics fundamentals and applications. Since then, he has been chief scientist of the laboratory. Bernard Dieny is co-author of more than 430 peer-reviewed publications and co-inventor of 70 patents. His team received the Research Descartes Prize from the European Council in 2006 for his work on thermally assisted Magnetic Random Access Memories. This research yielded the launching of a start-up company named Crocus Technology in 2004. In 2009, B.Dieny was granted an ERC Advanced Grant aiming at the development of very low power electronic circuits based on an hybrid technology combining semiconductor and magnetic materials respectively performing the logic and memory functions. This ERC together with an ERC Proof of Concept yielded the launching in 2014 of another start-up company EVADERIS which is a fabless company of design of low-power circuits exploiting this hybrid technology. In 2015, B.Dieny received a second ERC Adv Grant aiming at the development of multifunctional circuits in CMOS/magnetic technology combining memory, logic, RF and sensing functions. 4 years ago, he also started an activity at INAC related to the applications of nanomagnetism in biology and particularly to a new cancer treatment based on the mechanical vibrations of functionalized magnetic nanoparticles. B.Dieny was awarded the Adrien Constantin de Magny Prize for his whole scientific carrier and particularly for the research work related to the spin-valves and to the magnetic memories allowing the development of very low power electronic circuits.