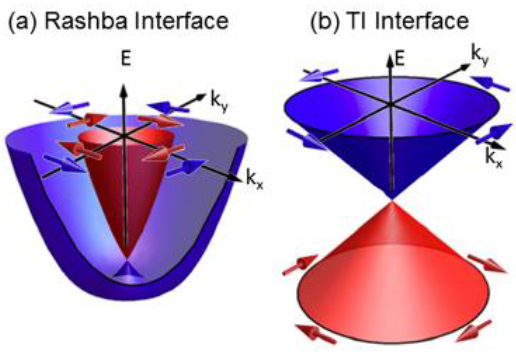 The ANR project TOPRISE project aims at studying and exploiting Topological Insulator and Rashba Interface States for Spin Electronics. Most spintronics devices are today based on the manipulation of spin currents that do not carry electrical charges but can be described as equal flows of electrons with opposite spins in opposite directions. The main operations in spintronics are the creation of spin currents from charge currents (electrical currents) and the detection of spin currents by transforming them into charge currents, in other words, conversions between charge and spin currents. Classical spintronics generally uses magnetic materials for these conversions, but it now appears that they can also be obtained by harnessing the spin-orbit coupling (SOC), the relativistic correction to the equation of quantum physics that can be significantly strong in materials containing heavy atoms. A new road for spintronics is now to explore how the spin-orbit interaction can be used as a tool to generate and detect spin currents. One direction to be followed during the duration of this project are the Ferromagnetic/Semi-conductor interfaces, involving Rashba and exchange splitting and the second one are the surfaces of topological insulators. The project starts in fall 2016, for a duration of 48 months.