Experimental evidence of the valley Nernst effect in WSe2

The Hall effect can be extended by inducing a temperature gradient in lieu of electric field that is known as the Nernst effect. After the discovery of the spin Nernst effect, the collection would not be complete without mentioning the valley degree of freedom benchmarked by the observation of the valley Hall effect in transition metal dichalcogenides. Here we show the experimental evidence of its missing counterpart, the valley Nernst effect in WSe2 which was predicted theoretically in 2015.

The valley Nernst effect comes from the interplay between thermoelectricity and the valley degree of freedom in monolayers of WSe2. In the monolayer form, WSe2 exhibits two inequivalent K-valleys (K and K’) at the corners of the surface Brillouin zone due to inversion symmetry breaking and strong spin-orbit coupling. The spin splitting in K and K’ valleys being opposite, it is possible to address the K valley with spin down and K’ valley with spin up (see figure). By using van der Waals epitaxy, high quality WSe2 mono and multilayers are grown on epitaxial graphene on SiC over large areas. Using such millimeter-sized sample, we are able to apply well-defined temperature gradients and demonstrate the very strong Seebeck response of this material. In a second step, we use the ferromagnetic resonance-spin pumping technique to (i) apply the temperature gradient by off centering the sample in the radio-frequency (RF) cavity and (ii) address a single valley using the spin pumping through spin-valley coupling (see figure). The combination of a temperature gradient and the valley polarization leads to the valley Nernst effect in WSe2 that we detect electrically in the RF cavity. The valley Nernst coefficient we measure is in very good agreement with the predicted value. This effect can be exploited to generate large transverse valley currents for valleytronics applications. 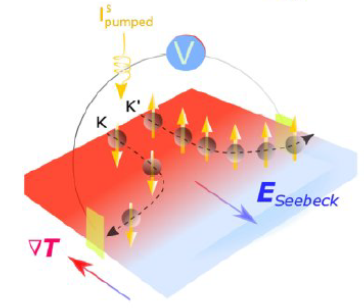