Relating magnetotransport properties to specific spin textures at surfaces or interfaces is an intense field of research nowadays. Here, we investigate the variation of the electrical resistance of Ge(111) under the application of an external magnetic field. We find a magnetoresistance term that is linear in current density j and magnetic field B, reaching 0.5 %, 100 times larger than in previous reports. We attribute this MR to the Rashba spin texture in the subsurface Ge(111) hole gas.

Magnetoresistance—a resistance induced by a magnetic field—is often associated with magnetic materials. Recent studies have identified a new effect called unidirectional magnetoresistance (UMR), which appears in nonmagnetic materials. The effect is characterized by an increase or decrease in the resistance, depending on the direction in which the current flows. Here, we discovered UMR in a surprising place—within the common semiconductor germanium. The size of the effect is 100 times larger than in previous cases. We propose a new theory of UMR to explain the results. UMR was first seen in 2017 in a topological insulator, and a detection of the effect in a two-dimensional electron gas quickly followed. As these systems are not intrinsically magnetic, it was inferred that UMR is the result of spin-momentum locking, which is the lining up of electron spins in a direction perpendicular to their momentum. Because of this spin-current connection, UMR could be useful in spintronic devices.

To measure UMR in germanium, we grew a layer of germanium along its (111) crystal orientation on a silicon substrate. We ran a current through the layer, while applying an external magnetic field. The measured resistance depended on the current and the field, with the strongest UMR effect occurring when the current was perpendicular to the magnetic field. As an example, a current of 10 μA and a field of 1 T produced a 0.5% change in the resistance, compared to a 0.002% change in previously observed UMR materials. To explain this relatively large response, we propose that the Rashba effect—a well-known splitting in the bands associated with up and down spins—generates spin-momentum locking in the subsurface states of germanium. 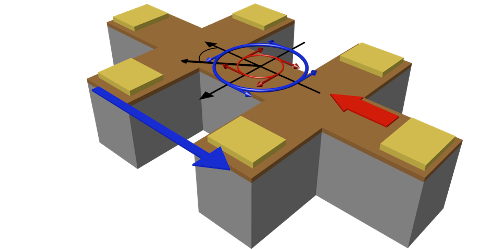 Figure: Schematics of the double Hall cross used to measure experimentally the unidirectional magnetoresistance in Ge(111). The UMR is related to the Rashba spin texture in the Ge(111) subsurface hole gas represented by the blue and red circles with opposite spin helicities.