Titiksha SRIVASTAVA defends his PhD on Tuesday 29th January, 2pm, at the CNRS conference room (25 rue des Martyrs). An access request is required before hand, is you wish to attend, please send an email to Sabrina.MEGIAS@cea.fr 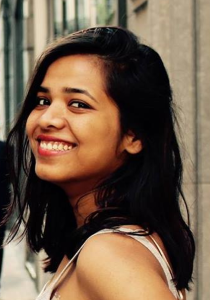 Control of interfacial magnetism has emerged to be of paramount importance for spintronics applications specially involving chiral magnetic structures called skyrmions. Skyrmions are envisaged to be the future information carriers owing to their solitonic properties. In heavy metal/ ferromagnet/ insulator heterostructures, skyrmions are stabilized by interfacial Dzyaloshinskii-Moriya interaction which is an antisymmetric exchange and competes with other interactions like symmetric exchange and magnetic anisotropy. In order to tune skyrmions, the interfacial magnetic properties need to be modulated. One of the energy efficient tools to maneuver interfacial magnetism is electric field effect. Voltage gating has been shown, in a number of studies since 2009, to locally and dynamically tune magnetic properties like interface anisotropy and saturation magnetization. However, its effect on interfacial Dzyaloshinskii-Moriya Interaction (DMI), which is crucial for the stability of magnetic skyrmions, has been challenging to achieve and has not been reported yet for ultrathin films.

This thesis demonstrates an optimization of trilayer systems consisting of a heavy metal/ ferromagnet/ oxide where skyrmions can be stabilized. In particular, I focussed on the Ta/FeCoB/TaOx system to nucleate skyrmions in the presence of very small out of plane magnetic field. Further, the different skyrmionic zones as a function of the FeCoB thickness and TaOx oxidation state are studied. We then show electric field induced modulation of interfacial DMI which forms the most important result of this thesis. We demonstrate 130% variation of DMI with electric field in Ta/FeCoB/TaOx trilayers through Brillouin Light Spectroscopy (BLS). Using polar Magneto-Optical-Kerr-Effect microscopy, we further show a monotonic variation of DMI and skyrmionic bubble size with electric field, with an unprecedented eciency. Since the electric field acts mainly on the FeCoB/TaOx interface, this study also points at the existence of the Rashba DMI explaining its high sensitivity to an applied voltage. We anticipate through our observations that a sign reversal of DMI with electric field is possible, leading to a chirality switch. This dynamic manipulation of DMI establishes an additional degree of control to engineer programmable skyrmion based memory, logic or neuromorphic devices.