A generic probe for spin fluctuations in nanometer-scale films

In the field of spintronics, which relies on the spin-dependent transport properties of matter, exploring spin fluctuations and phase transitions in ultrathin films is essential as it provides key information to engineer materials for applications. Here, O. Gladii et al investigated the generic character of a novel method to probe spin fluctuations through demonstration with ferromagnetic and antiferromagnetic orders, metallic and insulating electrical states.

Spin currents are key contributors to applied science. The spin pumping effect has attracted considerable attention in this area, due to its versatile capacity to unravel a variety of spin-dependent transport phenomena. The spin pumping method consists in bringing a ferromagnetic layer, known as the spin injector, out-of-equilibrium to generate a spin current and propagate this latter into a neighboring layer known as the spin-sink. In earlier experiments, the antiferromagnetic spintronics team demonstrated that spins propagate more efficiently in a spin sink where the magnetic order is fluctuating rather than static, thus providing a novel method to probe magnetic phase transitions. Experimental application of the method proved to be more useful for antiferromagnetic spin-sinks due to the absence until then of a benchtop technique to access paramagnetic-to-antiferromagnetic transitions in thin films. Whether the method applies for metallic and insulating spin-sink, and whether the underlying phenomenon is observed when spins are carried by conduction electrons (electronic transport) and by excitation of localized-magnetic-moments (magnonic transport) were still a subject of debate.

In this work, O. Gladii et al experimentally demonstrated that spin pumping can be used as a generic probe to identify spin fluctuations. By selecting representative materials – ferromagnetic and antiferromagnetic orders, metallic and insulating electrical states – and interacting environments to promote either electronic or magnonic transport, the results show that the phenomenon applies with all kinds of ordering and electrical states and all kinds of spin current. These findings should contribute to future advances in characterization and engineering of new materials. 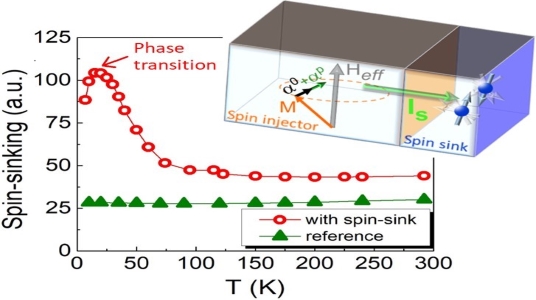 By scanning the temperature it is possible to find enhanced spin-sinking due to spin fluctuations.
Inset: the spin pumping experiment.