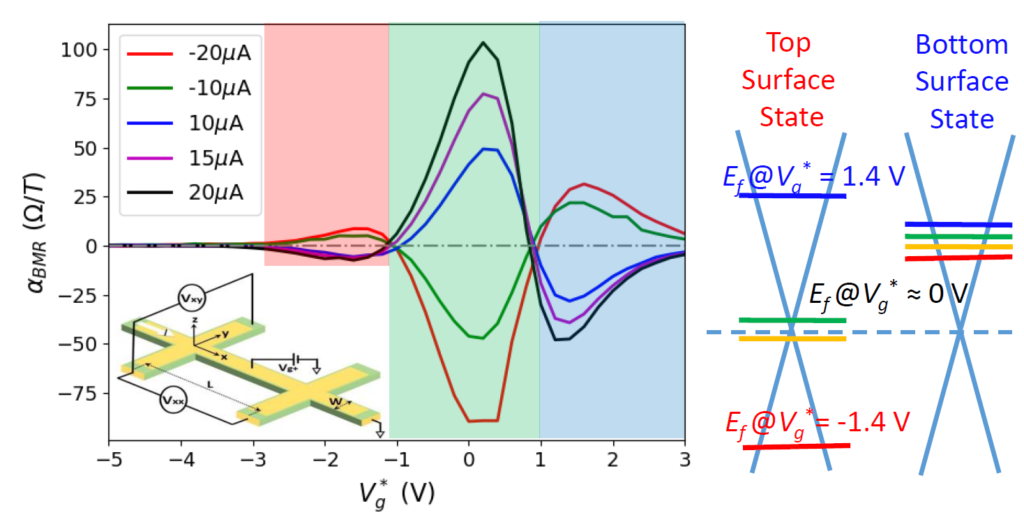 Left panel shows the evolution of the BMR parameter αBMR at different current values, showing its linearity with the current intensity, altogether with a triple change of sign as a function of the gate voltage value. On the right the position of the Fermi level within the Dirac cone on the top and bottom surface states are depicted according to the colored region of the gate voltage value. The BMR of the two surface states are opposite due to their opposite chirality. The total BMR thus results in the competition of this two opposite contribution.

We report the observation of this bilinear magnetoresistance (BMR) in strained HgTe, a prototypical TI. We show that both the amplitude and sign of this BMR can be tuned by controlling, with an electric gate, the relative proportions of the opposite contributions of the top and bottom surface states of the HgTe. This phenomenon, unique to TI, offers novel opportunities to tune their electrical response for spintronics.

Spin-orbit effects appearing in topological insulators (TI) and at Rashba interfaces are currently revolutionizing how we can manipulate spins and have led to several newly discovered effects, from spin-charge interconversion and spin-orbit torques to novel magnetoresistance phenomena. In particular, a puzzling magnetoresistance has been evidenced, bilinear in electric and magnetic fields. At magnetic fields of 1 T, the magnetoresistance that we observed in HgTe is of the order of 1 % and has a larger figure of merit than previously measured TIs. We propose a theoretical model giving a quantitative account of our experimental data. We show that both the amplitude and sign of this BMR can be tuned by controlling, with an electric gate, the relative proportions of the opposite contributions of opposite surfaces, according the Fermi level position respect to the Dirac point of both surfaces. This phenomenon, unique to TI, offers novel opportunities to tune their electrical response for spintronics.

We carried out the magneto-transport measurements at low temperature (13 K) on a conventional Hall bar device. The magnetoresistance (R – R0, where R0 is the resistance at B = 0 T) for B aligned in plane but transverse to the Hall bar (y-axis) follows a simple expression: αBMRBy + QBy2, which contains two contributions. The first one is odd and linear in field and corresponds to the BMR contribution. The second one is a quadratic contribution, even in field. For B along x and z, the magnetoresistance is mainly quadratic with field. Furthermore, the coefficient of the linear term (αBMR) exhibits a linear dependence on current (αBMR ~ I). The BMR is proportional to the current and magnetic field B along the y-axis, i.e. ~ IBy, and vanishes for B along x- and z-axis. This results from the opening of the backscattering channel due to inhomogeneous spin momentum locking of the Fermi contours. The demonstration of this phenomenon in a cubic system rules out the spin warping origin previously put forward to explain these phenomena.