A new form of spintronic is emerging, exploiting electrical insulators. Recent spectroscopic studies performed at SPINTEC have revealed the coherent coupling that may establish between two distant macrospins separated by a non-magnetic dielectric spacer via circularly-polarized acoustic phonons that carry angular momentum information. This long-range effect represents an important progress in magnonics and spin wave computing. 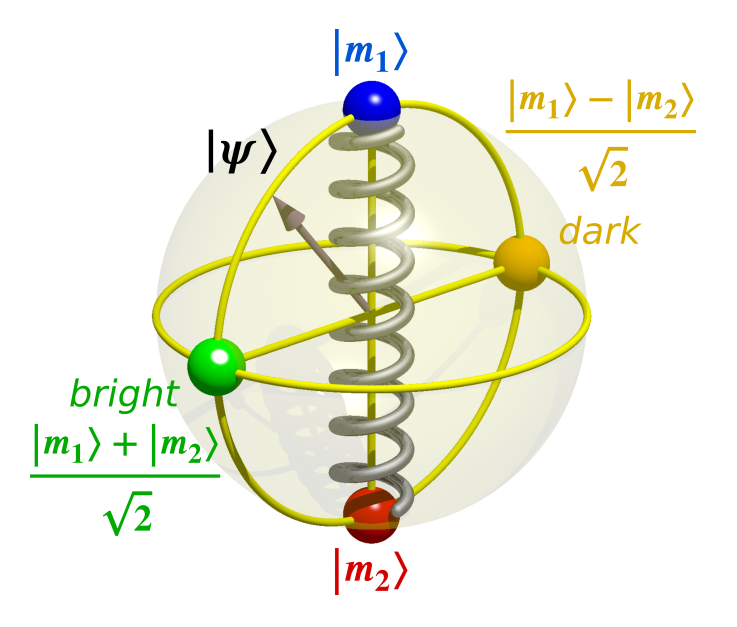 Bloch sphere representation of the generic hybridization of |m1> and |m2>. The equatorial plane is reached when resonance of |m1> and |m2> are matched. It can evolve there to bright and dark states, which correspond to the extrema coupling to an inductive antenna.

Quantum processing requires the coherent transfer of state information between distant quantum bits. Transfer by direct coupling is limited to distances where their wave functions overlap. Indirect coupling via a slowly decaying third-party waveform—a tripartite hybridization with vanishing direct coupling elements—promises an enhancement of the maximum separation and thus the size of quantum bit arrays. Here, we demonstrate control of the collective dynamics of two distant magnets mediated by the lattice vibrations, or phonons, in a monolithic device—an important step toward the development of integrated solutions.

In our experiment, two thin ferromagnets sit on either side of a 0.5-mm-thick crystal and communicate with one another by acting as “speakers” and “microphones” for sound waves in the crystal. The system can be brought into tripartite hybridization by carefully tuning the two ferromagnetic resonance frequencies to an acoustic resonance of the whole crystal. There, the entire system of magnetization and lattice can oscillate only coherently. One can illustrate the appeal of our method at the hand of the Bloch sphere shown in the Fig.1 that spans the phase space of the bonding and anti-bonding states that is relevant for a large community.

Illumination of the bound and antibound magnetic states by an external microwave field leads to bright or dark collective modes depending on the sign of the indirect mutual coupling. The phononic system uniquely allows for switching its polarity by shifting parity of the phonon-mode index, which decides if the lattice displacement at the position of the two magnets is out of phase or in phase.

The long lifetimes of magnons and phonons inside insulating garnets are key to unveiling this remote strong coupling between macrospins at room temperature. At low temperatures, we envisage quantum information exchange and distant entanglement of magnons, phonons, and microwave photons. Our work marries the fields of magnonics and phononics, profiting from the best of both worlds.