Magnetic skyrmions are localized chiral spin textures, which offer great promise to store and process information at the nanoscale. The unique sense of rotation of their surrounding domain wall, called chirality, is resulting from the so-called Dzyaloshinskii−Moriya Interaction. C.E. Fillion et al. have managed the inversion of the skyrmion chirality by applying a gate voltage, thus opening the possibility to individually manipulate skyrmions for complex computing. 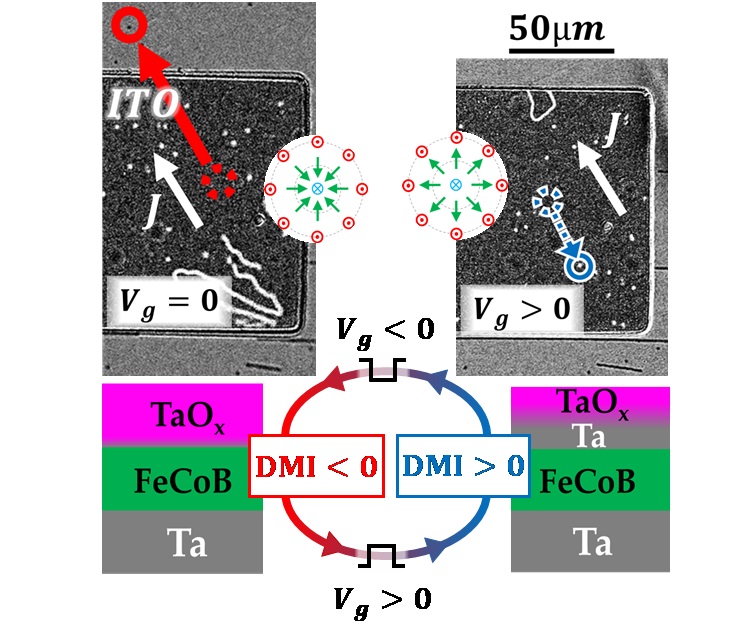 (Top) MOKE images of skyrmions under the transparent electrode (ITO, in black) showing the motion of skyrmions along the current J under no gate voltage (left) or against it under positive gate voltage Vg (right). Schematics illustrate their structure. (Bottom) Illustration of the effect of the gate voltage on the oxygen content at the ferromagnet/oxide interface.

Skyrmions are circular magnetic domains encircled with a single chirality domain wall. They attract much interest since it is possible to shift them (undistorted) under an electric current, with great efficiency and in a direction that depends on their chirality. These nanoscale data bits are hence attractive for spintronic applications and are envisioned for dense data storage, efficient logic or neuromorphic computing.

The sign of the Dzyaloshinskii−Moriya Interaction (DMI) determines the chirality of the skyrmion. In ultrathin trilayers composed of a heavy metal, a ferromagnet and an oxide, DMI has an interfacial origin related to the symmetry breaking at interfaces. Our team has previously shown that the application of a gate voltage on the structure can modify the DMI amplitude.

C.E. Fillion et al. have demonstrated the first local and low power reversal of skyrmion chirality due to DMI sign inversion under gate voltage. Such reversal induces an inversion of the current induced motion of the skymions under the gate electrode. This study, performed in Ta/FeCoB/TaOx ultrathin trilayers, was published in Nature Communications.

In order to access variation of DMI sign under a gate voltage, the authors observed the current induced motion of skyrmions under a transparent gate using polar magneto-optical Kerr-effect (MOKE) microscope. Brillouin Light spectroscopy (BLS) measurements confirmed the inversion of DMI sign, which is attributed to oxygen ion migration under the gate.

Using micromagnetic simulations, the team confirmed that the inversion of skyrmion chirality is possible without losing the skyrmions stability. Further material optimization would enable the inversion of the chirality of a unique stable skyrmion, envisioning an implementation in logic gates or neuromorphic computing. This study results from the collaboration of teams from Spintec and Institut Néel in Grenoble and the Laboratoire des Sciences des Procédés et des Matériaux in Villetaneuse.