Evidence for spin to charge conversion in GeTe(111), among most read 2016 papers of APL Mater.

GeTe has been predicted to be the father compound of a new class of multifunctional
materials: ferroelectric Rashba semiconductors. In that sense, they are expected to display a coupling between spin-dependent k-splitting and ferroelectricity, thus allowing an electrical control of spin-to-charge conversion phenomena in spintronics. This paper reported the epitaxial growth of Fe/GeTe(111) heterostructures by molecular beam epitaxy. Spin-pumping experiments by pumping a spin current from the Fe layer into GeTe at the Fe ferromagnetic resonance, have confirmed the spin-to-charge conversion, detecting a clear transverse charge current originated from the ferroelectric GeTe. This invited paper has been tag among the most read paper of APL Material in 2016. 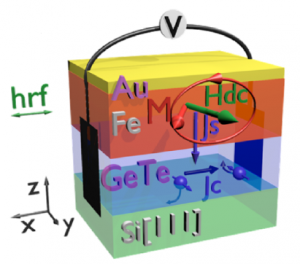