At the interface between the strontium titanate and the lanthanide aluminate forms a 2 dimensional electron system. By using a dynamical spin injection technique, we were able to demonstrate a record conversion yield between spin and charge current in this system, moreover that is tunable in amplitude and sign by an electrostatic gate, a premiere. 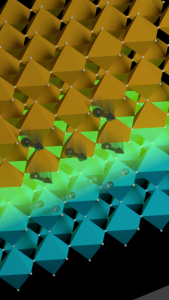 The spin–orbit interaction couples the electrons’ motion to their spin. As a result, a charge current running through a material with strong spin–orbit coupling generates a transverse spin current (spin Hall effect, SHE) and vice versa (inverse spin Hall effect, ISHE). The emergence of SHE and ISHE as charge-to-spin interconversion mechanisms offers a variety of novel spintronic functionalities and devices, some of which do not require any ferromagnetic material. However, the interconversion efficiency of SHE and ISHE (spin Hall angle) is a bulk property that rarely exceeds ten percent, and does not take advantage of interfacial and low-dimensional effects otherwise ubiquitous in spintronic hetero- and mesostructures. In a recent study just in Nature Materials, we make use of an interface-driven spin–orbit coupling mechanism—the Rashba effect—in the oxide two-dimensional electron system (2DES) LaAlO3/SrTiO3 to achieve spin-to-charge conversion with unprecedented efficiency. Through spin pumping, we inject a spin current from a NiFe film into the oxide 2DES and detect the resulting charge current, which can be modulated, for the first time, in amplitude and sign by a gate voltage. The amplitude of the effect and its gate dependence is a direct consequence of the electronic structure of the 2DES and highlight the importance of a long scattering time to achieve efficient spin-to-charge interconversion.