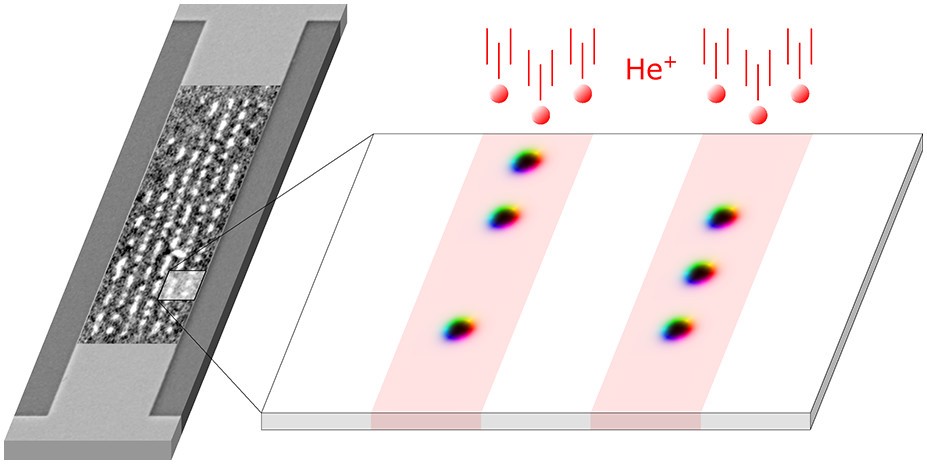 Local ion irradiation leads to a change of the magnetic properties which allows to stabilize magnetic skyrmions in tracks. left : magnetic microscropy image of skyrmion in a 3 µm Pt/Co/MgO wide track. Skyrmions nucleate on the part irradiated with the focused He+ ion beam. Right : simulation of skyrmions in irradiated tracks.

Magnetic skyrmions are currently fascinating many research groups in the world, as they could offer a new way to store and process information in our computers. These nanoscale magnetic textures are composed of elementary nanomagnets that wind up to form a stable spiral structure, like a well tighten node. Skyrmions can be manipulated by very low electrical currents, which opens a path for their use as information carriers in computing devices. Several groundbreaking memory and logic devices have thus been proposed, that promise very large information density and low power consumption.

These devices are based on the manipulation of trains of skyrmions in magnetic tracks by electrical current. However, these applications still remained distant as skyrmions naturally move toward the edge of the track where they can annihilate. In this work, we have shown that light He+ ion irradiation can be used to create and guide skyrmions in racetracks. Light He+ Ion irradiation is a well-known tool to modify the magnetic properties of magnetic ultrathin films. By using a focused ion beam, these magnetic properties can be changed at the nm scale in order to pattern magnetic tracks where skyrmion naturally nucleate (see figure). On driving them by current, skyrmions can be moved along the irradiated tracks, leading to the suppression of the transverse motion. This possibility to create skyrmion racetrack and guide their trajectory in magnetic ultrathin films open some novel perspectives to manipulate skyrmion in memory and logic applications.