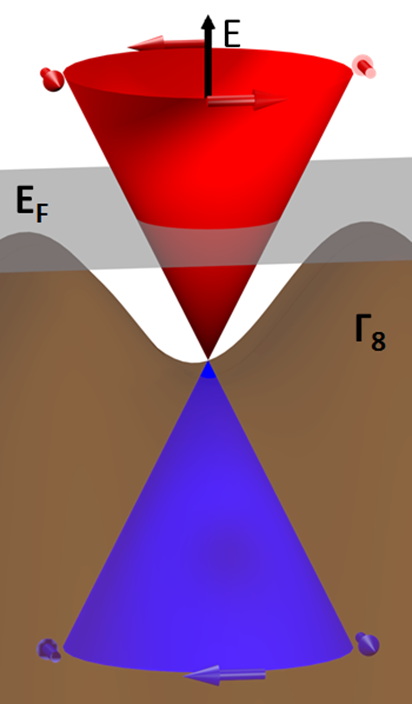 We report the observation of spin-to-charge current conversion in strained mercury telluride at room temperature, using spin pumping experiments. We show that a HgCdTe barrier can be used to protect the HgTe from direct contact with the ferromagnet, leading to very high conversion rates.

Conventional spintronics is based upon the use of magnetic materials to manipulate spin currents. Such a manipulation can be achieved by harnessing the spin-orbit coupling in nonmagnetic materials. It has also been recently demonstrated that higher conversion rates can be obtained by using two-dimensional electron gas with high spin-orbit coupling, in topological insulator surfaces. As a consequence, the use of topological insulators is generating a growing attention in spintronics. The main interest of TIs lies in their surface states, which possess a linear Dirac-like energy dispersion, and in the perpendicular locking between spin and momentum. A flow of electric current in the two-dimensional electron gas gives rise to a perpendicular spin accumulation, this effect being known as the Edelstein effect, while the reverse spin-to-charge conversion phenomenon is known as the inverse Edelstein effect.

We demonstrate a very efficient spin-to-charge current conversion at room temperature in strained HgTe. We also show that a HgCdTe barrier can be used to protect the HgTe surface states from direct contact with the ferromagnet, leading to an enhancement of the conversion efficiency. We then show that the dependence of the conversion with the HgTe thickness differs from the usual dependence observed in spin Hall materials. These dependences, associated with the temperature dependence of the resistivity, suggest that the high conversion rate can be attributed to the spin momentum locking at the surface states of HgTe.

These results underline the necessity to add an interlayer between the topological insulator and ferromagnetic metal to obtain high conversion efficiencies, and show that insulating layers are good candidates to protect the TI surface states. The HgTe thickness dependence of the conversion rate is strongly different from SHE materials, suggesting that several mechanisms, such as hybridization, might play a key role.