Large spin Hall angles have been observed in 3d ferromagnetic materials, but their origin, and especially their link with the ferromagnetic order, remain unclear. Here, we investigated the evolution of the inverse spin Hall Effect of NiCu alloys across their Curie temperatures using spin-pumping experiments. We show that the inverse Spin Hall Effect in these samples is comparable to that of platinum, and that it is insensitive to the magnetic order. 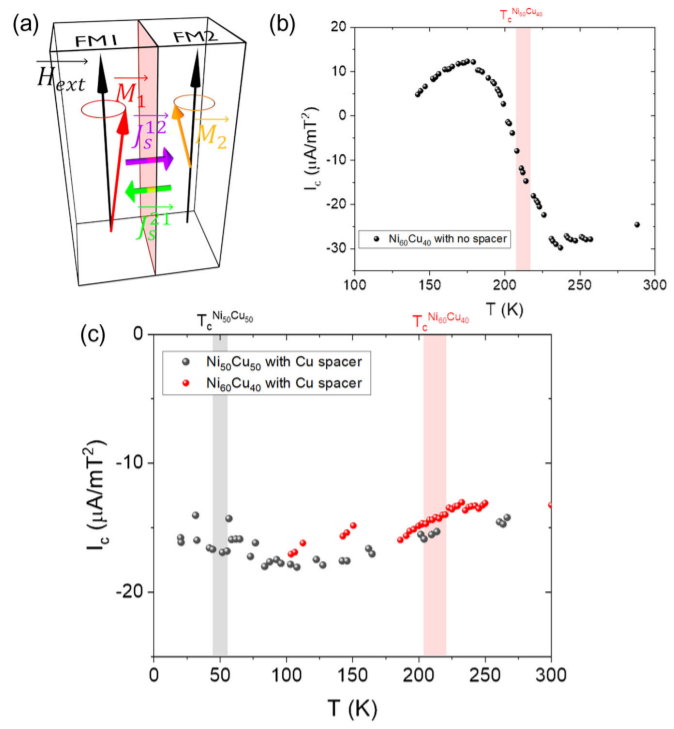 By using spin pumping measurements, we injected a spin current from a CoFeB layer into the weak ferromagnets Ni60Cu40 and Ni50Cu50. The charge current generated by the spin to charge interconversion was subsequently measured across the critical temperatures (Tc) of these alloys. A change of sign of the generated spin current was observed across the Tc when the CoFeB and NiCu layers are in direct contact. However, this sign change disappears when inserting a copper layer between the two. This indicates that two ferromagnetic materials can be coupled and influence each other at the Ferromagnetic Resonance (FMR), thus questioning the results of studies claiming the observation of spin fluctuation and spin-charge interconversion using FMR measurements. Most importantly, the fact that the generated charge current does not change across the critical temperature of NiCu alloys indicates that the spin-charge interconversion does not depend on the magnetic phase.

The independence of the interconversion on the magnetic phase shows either that the band structure of NiCu is not affected, or that its change across the Tc does not influence the spin-charge interconversion. These results consequently provide an important contribution to both the experimental and theoretical understanding of the spin to charge interconversion in ferromagnetic materials.