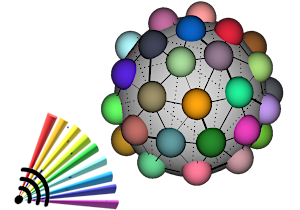 A key component of artificial intelligence is neuromorphic computing, which represents the endeavor to replicate the human brain to perform efficiently very complex tasks such as pattern recognition. Until now, almost all practical implementations of deep neural-networks are emulated using nanostructured electronic components that try to replicate the brain’s volume architecture on a surface. However, implementing them has proven to be challenging due to the connectivity bottleneck related to the very large number of physical interconnections between the nanoscale building blocks. With k-NET, we envisage a neural-network implementation that is qualitatively different from all existing propositions. Instead of designing and structuring individual nonlinear elements (neurons) and their interconnections (synapses) in real space, we propose a different paradigm in which these elements are constructed in reciprocal or k-space of large dimensionality. We imagine to realize this concept of hyperconnectivity using populations of the eigen-excitations of ferromagnetic thin films – spin waves – as neurons.

The project is a 42 months effort of 7 European partners coordinated by the UMϕ CNRS-Thales. The role of SPINTEC is to provide both an experimental and theoretical expertise in the design and characterization of spin waves specific spatio-temporal profiles when confined in a micron-sized structure with a magnetic texture. It includes an effort to develop new schemes to couple inductively to short wavelengths spin-wave modes. We will also participate in the engineering of the spin-waves dispersion and their non-linear behavior by performing micromagnetic simulations with an eigen solver in the frequency domain.