Van der Waals (vdW) layered magnets are promising materials to develop ultracompact and multifunctional spintronics devices. However, most of them are magnetic only at low temperature and are almost exclusively studied in the form of small flakes obtained by mechanical exfoliation. Here, we demonstrate the direct growth by molecular beam epitaxy of Fe5GeTe2, a room temperature vdW ferromagnet. 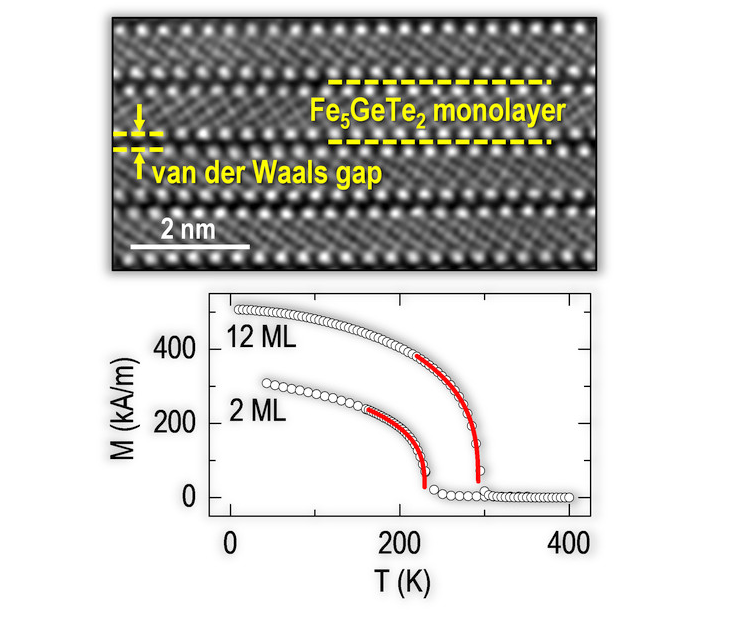 Electron microscopy image of epitaxial Fe5GeTe2, and temperature dependence of the magnetization for a thick film and a bilayer

It is known for a long time that magnetism vanishes when lowering the thickness of a material. The Mermin-Wagner theorem even states that long-range magnetic order cannot survive in a 2D isotropic system due to the competition with thermal fluctuations. For this reason, magnetic materials have long been missing in the family of 2D vdW crystals. It is only in 2017 that long-range magnetic order was reported in monolayer CrI3 and bilayer Cr2Ge2Te6, in which ferromagnetism is allowed by the presence of a magnetic anisotropy. The ultimately large surface-to-volume ratio of 2D magnets makes their magnetic properties very sensitive to external stimuli such as strain, light or electric fields. This characteristic can be used to create multifunctional and low power spintronics devices. However, most of 2D magnets possess a low Curie temperature (TC) and are obtained by exfoliation of bulk crystals. Integrating them into practical multilayers requires higher TC and scalable fabrication methods.

We achieved the uniform growth of Fe5GeTe2 thin films on sapphire, on centimeter-scale area, by molecular beam epitaxy. By employing a set of structural and chemical characterization techniques such as X-ray diffraction, Rutherford backscattering and scanning transmission electron microscopy, we could demonstrate the single-crystallinity of the films and the perfect control of the ternary composition. The magnetic properties were measured with SQUID and X-ray magnetic circular dichroism as a function of the temperature and thickness of the layers. We found ferromagnetic ordering up to room temperature (293 K) in thick films and up to 229 K in bilayers, which is significantly higher than in other 2D magnets. A striking result is that ultrathin layers display ferromagnetism despite their very weak magnetocrystalline anisotropy. Actually, we found that the temperature evolution of the magnetization does not follow the expected behavior for 2D spin systems. It is better described by 3D magnetic models, independently of the thickness. This unconventional behavior suggests that high temperature ferromagnetism in Fe5GeTe2 primarily originates from the 3D coordination between Fe atoms inside each vdW monolayer.

This work highlights the potential of molecular beam epitaxy as a key tool for the growth and tailoring of 2D magnets, and constitutes a stepping stone to their integration into large-area vdW multilayers for spintronics.