Magnetic field mapping techniques have continuously been developed due to the necessity for determining the spatial components of local magnetic fields in many industrial applications and fundamental research. Several factors are considered for sensors such as spatial resolution, sensitivity, linear response, required proximity to the sample, as well as the ability to filter noise and to measure without bringing in any perturbations to the sample.

The existing techniques usually combine several of the desired features and in many cases they are found to be complementary. A well-established tool for obtaining the spatial distribution of magnetic fields is the magneto-optical imaging (MOI) method, which makes use of so-called MOI films such as ferrite garnet films and nanoparticle films. A MOI film placed on a magnetized surface will have its magnetic domain structure reorganized in accordance with the local intensity of the magnetization or stray eld produced by the analyzed material. However, the method is non-quantitative and depositing a MOI film is an invasive process that leaves traces after removal. Other field mapping techniques are based on scanning, such as superconducting quantum interference device (SQUID), Hall bar, magnetic force, and scanning magnetoresistive microscopy. Despite being highly sensitive, scanning techniques are slow and each of them has its own drawback. For instance, SQUID microscopy operates at low temperatures, and magnetoresistive sensors operate with dc currents, thus possibly introducing heat and magnetic fields that can alter the sample.

In the paper we published recently in Scientific Reports [1], we report magnetic field mapping by use of a structure based on organized arrays of close-packed mobile magnetic elements. Each element is a magnetic cantilever with microscopic length and nanometer scale thickness. When placed in proximity to magnetized materials, the cantilevers are deflected depending on the intensity and direction of the stray fields. Due to a local change of reflectivity induced by the stray field, the field lines generate a contrast, which is even visible to the naked eye on the surface of the mapping device. The paper also demonstrates that the magnitude of a uniform magnetic field can be quantitatively determined by using a method based on coherent light diffraction. The sensitivity and the resolution of the device can be adapted by tuning the dimensions of the cantilevers and the number of cantilever in the arrays. Such magneto-optical surface offers the advantage of being a passive and easy-to-use device, since neither power source nor sample preparation is required.

The technological development was performed at PTA. 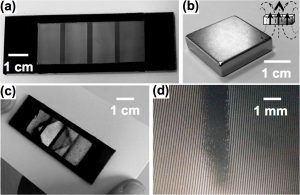 Fig 1: (a) Test device made of four different arrays of cantilevers of different size.  (b) The NdFeB permanent magnet is (c) placed under the test device, which is perfectly opaque. The field lines form contrasted regions, which remind of shape of the magnet. (d) Close-up view by optical microscopy of a contrasted area.