The writing in conventional magnetic memories based on magnetic tunnel junctions (STT-MRAM) is intrinsically stochastic : a large amplitude thermal fluctuation is required to trigger the siwthing of the storage layer magnetization. SPINTEC has shown that this stochasticity can be almost completely suppressed by inducing an oblique anisotropy (easy-cone anisotropy) in the storage layer. This greatly increases the writing speed in the memory.

In magnetic memories (MRAM), the information is encoded via the relative orientation of the magnetizations of two ferromagnetic layers : a storage layer (STO) of switchable magnetization and a reference layer (REF) of fixed magnetization (« 0 »=parallel alignment=low resistance state ; « 1 »=antiparallel alignment=high resistance state). These magnetizations are oriented normal to the plane of the layer. During write, the STO magnetization is switched by the Spin Transfer Torque (STT) phenomenon due to the exchange interactions between the tunneling electrons injected in STO (spin-polarized along the REF magnetization) and those responsible for the STO magnetization. When the magnetizations of STO and REF are strictly parallel or antiparallel, this torque is zero. A slight angle between the two magnetizations is required to trigger the STO magnetization reversal. In STT-MRAM, this initial angle is provided by magnetic thermal fluctuations. This yields stochasticity in the switching. Consequently, it is necessary to increase the write pulse duration and/or its amplitude to reach sufficiently low write error rates (for instance 10-11). This is detrimental for the realization of short access time memory such as SRAM-like used for Cache applications.

In this study, we have shown that this problem can be circumvented by inducing an easy-cone anisotropy in STO [1].
This means that, at equilibrium, the STO magnetization, instead of being aligned along the normal to the plane of the layer, lies along any direction on a cone of axis normal to the plane. In contrast, the REF is designed to keep its perpendicular anisotropy. Thanks to this easy cone anisotropy, the STO and REF magnetizations always keep a relative angle so that upon write, the STO magnetization reversal can be triggered at the very onset of the write current pulse. Such easy cone anisotropy has been evidenced at the lab. It results from higher order anisotropy terms which could be revealed by ferromagnetic resonance experiments (see Figure a)). This quadratic anisotropy itself results from spatial fluctuations of uniaxial anisotropy which can be induced during deposition and annealing of the magnetic tunnel junction stacks. Thanks to this easy cone anisotropy, the writing is much more reproducible and can be faster and/or realized at lower write voltage thereby reducing the write energy consumption (Figure b)). 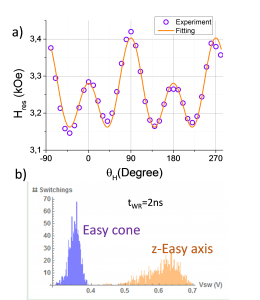 Figure : a) Ferromagnetic resonance field versus angle between applied field and normal to the layers. The variation indicates the presence of second order (uniaxial) and fourth order (quadratic) anisotropy terms.b) distribution of STO magnetization switching events showing a narrower distribution at lower switching voltage Vsw in presence of an easy cone anisotropy than with a uniaxial perpendicular anisotropy.