Magnonic is an emerging research field, which aims at exploiting the transport of pure spin current in magnetic materials. The elementary excitations are the propagating spin-waves, also called magnons, which are bosonic quasiparticles. The advantages over conventional electronic devices are a significant reduction in energy consumption thanks to the absence of Joule heating, as well as new features taking advantage of the wave-particle duality. Magnetic materials could be here electrical insulators, knowing that their dynamical characteristics are usually much better than their metal counterparts. Among all magnetic insulators, yttrium iron garnet (YIG or Y3Fe5O12) holds a special place for having the lowest known damping in nature. 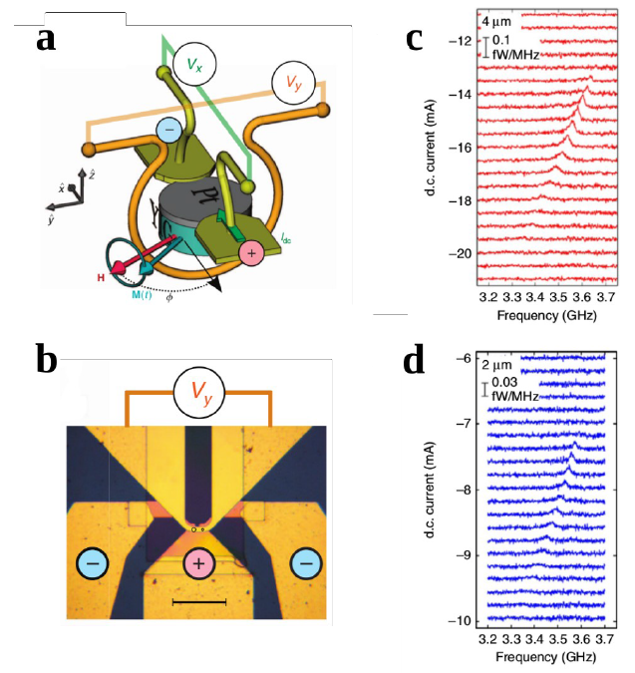 Illustration 1 : (a) Schematic diagram and (b) microscopic image of the device used in the study of spin transfer effects in two YIG|Pt microdiscs of respectively 2 and 4μm in diameter (c) and (d). For each of the disks, measurement with a spectrum analyzer of the fluctuations Vy when a DC current flows between the two electrodes Vx. An RF signal appears above a critical current of about -13,5mA and -7,4mA respectively for each disk.

Until recently magnetic insulators could not be used in spintronics. This situation has changed radically since the discovery of the spin Hall effect, which capitalizes on the deflection of the electron trajectory according to their spin orientation. When a charge current (Jc) is flowing in a normal metal of strong spin-orbit coupling such as platinum (Pt) it converts into a pure spin current (Js), propagating in the perpendicular direction, with a conversion efficiency set by the spin Hall angle (see FIG2). If  Js can be transmitted through the interface then it can in principle provides the long sought electrical coupling with a pure spin current flowing in an adjacent magnetic insulator. 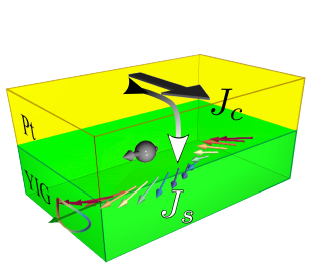 Illustration 2 : Schematic illustration of the Spin Hall effect showing the inter-conversion of a charge current in Pt, Jc, into a pure spin current Js entering in the YIG.

It turns out that the experimental confirmation of the existence of a spin transfer at the insulator/metal interface has been the subject of a controversy in the community for the past 5 years. The striking signature of the spin transfer process would be the emission of microwave radiation when the system is pumped out of equilibrium by a d.c. current (FIG1). Since the spin transfer torque on the magnetization is collinear to the damping torque, an instability threshold occurs when the natural damping is fully compensated by the external flow of angular momentum, leading to spin-wave amplification through stimulated emission. Using analogy to light, the effect was called spin-wave amplification by stimulated emission of radiation (SWASER). The situation would correspond to a lossless magnon’s propagation. In a recent paper submitted to Nature Communications [1], we showed for the first time it was possible to induce self-oscillation of YIG while flowing a direct charge current in an adjacent layer of Pt. It requires though that the charge current exceeds a critical threshold. To observe this effect, two actions were necessary in order to minimize the threshold value. First it was necessary to use ultra-thin film of YIG of the highest quality, which, second, it was necessary to lithographically pattern the magnetic element into micron-size disks in order to lift the degeneracy between normal modes. The reported direct observation of an RF signal emitted spontaneously should allow in the future a better understanding of the spin transfer processes at the metal/insulator interface, and it should possibly open the way to new magnonic functions exploiting the electronic control of magnetic relaxation.