Review — Opportunities and challenges for spintronics in the microelectronics industry 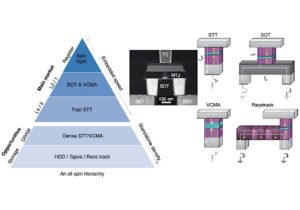 The European consortium SpintronicFactory, largely supported by the French laboratories Spintec (Grenoble) and the CNRS-Thales Joint Lab (Palaiseau), publishes in the journal Nature Electronics an ambitious roadmap for spintronics. This discipline on the borderline between magnetism and microelectronics is indeed reaching maturity, offering broad prospects for innovation.

Since its birth in Europe at the end of the 1980s, spintronics has shown an exceptional development at the fundamental level, and offers more than ever important prospects in information and communication technologies. The history of spintronics is marked by many important discoveries and applications, including magnetic recording for computer hard disks.

Today, spintronics is gaining momentum in the microelectronics industry with the launch of industrial production from all the major players in the field (Samsung, TSMC, INTEL, Global Foundries) of a new type of magnetic memory – MRAMs (Magnetic Random Access Memory). This offers electronic circuits new functionalities and improved performance, particularly in terms of power consumption.

The European portfolio of patents in spin electronics is very strong, with several key patents on magnetic field sensor and MRAM technologies, reflecting European excellence in fundamental research. This has enabled the launch of several spin-offs

However, these industrial benefits remain modest in Europe compared to those in Asia and the United States. It is the ambition of the European SpintronicFactory consortium, created in 2016, to promoting excellence in European research in spintronics, along with its potential for innovation. The consortium publishes its vision of the roadmap of spintronics for applications, in Nature Electronics.

For memories, the challenges identified concern the realization of very high density chips by developing 3D-inspired disruptive solutions, as well as the reduction of power consumption of chips by implementing fundamental interface effects, such as spin-orbit quantum coupling or the control of magnetic properties through voltage without the flow of electric current.

Sensor challenges reflect the very diverse needs of this market, based on improved sensitivity, magnetic field measurement range and innovative sensor architectures. Today, the main markets are smart phones (3D magnetometers / digital compasses), the automotive sector (linear or angular position and speed sensors), current and power sensors, and scanners. New applications are emerging in the Internet of Things (IOT) and biomedical fields with the development of reliable low-power devices on silicon or flexible substrates.

Spintronics can also bring a major contribution in the field of radio-frequency and THz technologies. Indeed, a direct current can be used to generate radiofrequency oscillations of magnetization, and conversely radiofrequency excitations can be converted into direct voltage. These oscillator and diode functions are interesting for communication components. The proof of concept has been demonstrated, it is now necessary to allow their concrete integration in different application fields, in particular compact and low power telecommunications, THz applications (imaging, security), micro energy recovery, artificial intelligence.

Finally, in a more prospective way, milestones are proposed to demonstrate the applied potential of spintronics to directly carry out information processing using the spin of the electron and not only its electrical charge, making it possible to further reduce the consumption of electronic circuits or to introduce new functionalities. The challenges identified relate in particular to the efficiency of conversion between spin current and charge current in the new concepts.

Meeting these various challenges will require progress in the control of non-conventional materials, their interfaces on which spintronic functionalities often depend, their nanofabrication and their implementation in production lines, including their specific metrology. Developments will also have to be carried out in numerical simulation, ranging from the integration of new effects in multiphysical codes, to multi-scale approaches from the atom to systems.