The broken inversion symmetry of some semiconductors may allow for spin–charge interconversion, but its control by electric fields is volatile. This has led to interest in ferroelectric Rashba semiconductors, which combine semiconductivity, large spin–orbit coupling and non-volatility. Here we report room-temperature, non-volatile ferroelectric control of spin-to-charge conversion in epitaxial germanium telluride films.

Spintronics could potentially be used to create low-power solutions for beyond complementary metal–oxide–semiconductor (CMOS) technology. Ideally, spin would be added as an extra degree of freedom into semiconductor-based electronics operating on charge. However, combining ferromagnets (as spin generators and detectors) with semiconductors has proved challenging due to issues with material compatibility and impedance mismatch. Ferroelectric Rashba semiconductors (FERSCs) have been identified as alternative materials for operating on spin and integrating logic and memory functionalities. FERSCs have a broken inversion symmetry, like several other semiconductors; however, because they are ferroelectric, they also display giant Rashba spin splitting of the bulk bands, with the additional effect that the spin direction in each Rashba sub-band can be reversed by switching the ferroelectric polarization.

We show that ferroelectric switching by electrical gating is possible in germanium telluride, despite its high carrier density, leading to a large resistance change across GeTe/metal (300%) and GeTe/Si (4000%) interfaces and possibility for a non-destructive readout of the ferroelectric sate. We also show that spin-to-charge conversion has a similar magnitude to what is observed with platinum, but the charge current sign is controlled by the orientation of ferroelectric polarization. Comparison between theoretical and experimental data suggests that the inverse spin Hall effect plays a major role in switchable conversion. 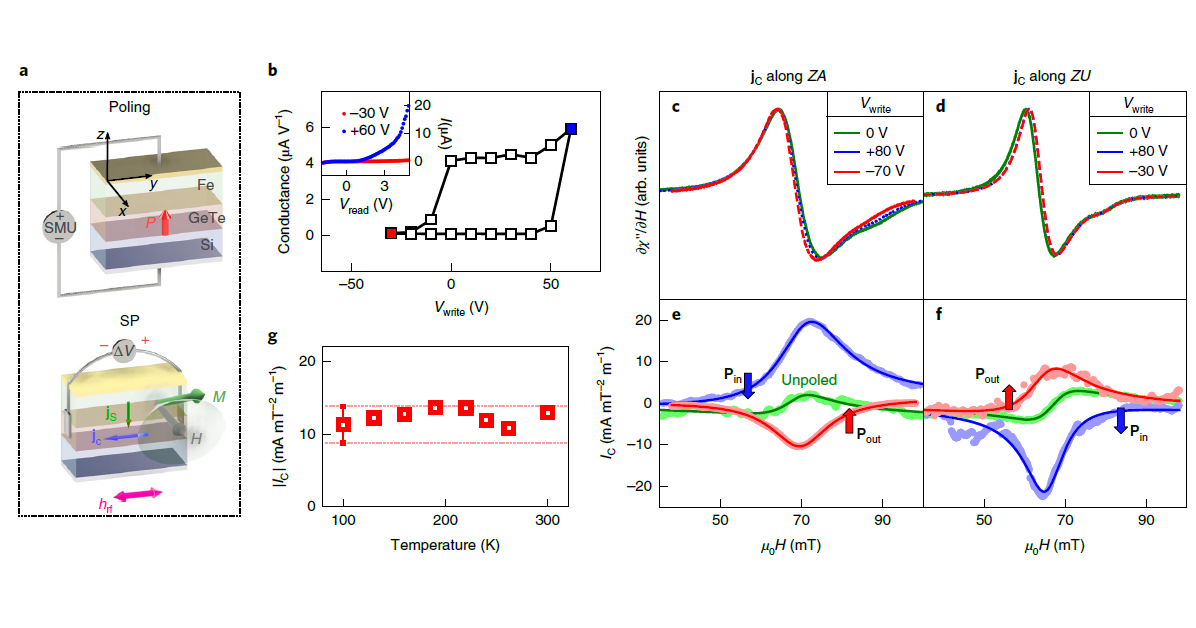 (a) Schematics of the poling of GeTe and spin pumping experiments. (b) Conductance evolution as a function of the ferroelectric state. (c-d) FMR differential absorption ∂χ″/∂H (c,d) and normalized current production (e,f) versus magnetic field for the slab oriented along ZA (c,e) and ZU (d,f), for different ferroelectric polarizations.The blue curves correspond to Pin (Vwrite < 0) and red to Pout (Vwrite > 0). The SP peak is positive (negative) for Pin and negative (positive) for Pout. The green curve in e and f refers to the pristine (unpoled) states. The relatively small amplitude of the SP signal in the unpoled state is associated with a multidomain ferroelectric configuration. (g) Temperature dependence of charge current production.

Like ferromagnetics, these measurements are reconfigurable and non-volatile but can be operated by electric fields, offering reduced power consumption. FERSCs could thus potentially be used to develop all-in-one devices that integrate spin generation, manipulation and detection. Notably, these findings merge in one the reading and writing elements of the recently proposed Magneto-Electric Spin Orbit device proposed by Intel for attojoule logic, in memory computing or artificial intelligence. Respect to our previous findings in SrTiO3 interfaces, the ferroelectric control of spin-charge conversion can be achieved here at room temperature.