Magnetic skyrmions are currently fascinating many research groups in the world, as they could offer a new way to store and process information in our computers. These nanoscale magnetic quasiparticles are composed of elementary nanomagnets that wind to form a stable spiral structure, like a well tighten node. Although predicted in the 80’s, it has only been observed for the first time in 2009. Three years later, two research teams demonstrated that skyrmions can be manipulated by very low electrical currents, which opens a path for their use as information carriers in computing devices. Several groundbreaking memory and logic devices based on the manipulation of skyrmion in nanotracks have thus been proposed, that promise very large information density and low power consumption. However, these applications still remained distant as skyrmions had been observed only at low temperature or in the presence of large magnetic fields and in exotic materials far from any applications. In 2016, we made an important discovery by demonstrating magnetic skyrmions at room temperature in ultrathin Pt/Co(1nm)/MgO multilayer nanostructures, a system also developed at Spintec for MRAM magnetic memory.

In this study, we did a step further toward application by demonstrating ultrasmall skyrmions, down to 30 m in diameter, stable at room temperature and without magnetic field in an exchange-biased Pt/Co/Ni80Fe20/Ir20Mn80 multilayer stack. This is achieved through an advanced optimization of the multilayer-stack composition in order to balance the different magnetic energies controlling the skyrmion size and stability. Magnetic imaging is performed bothwith magnetic force microscopy and scanning nitrogen-vacancy magnetometry, the latter providing unambiguous measurements at zero external magnetic field. In such samples, we show that exchange bias provides an immunity of the skyrmion spin texture to moderate external-magnetic-field perturbations which is an important feature for applications such as memory devices. These results establish exchange-biased multilayer stacks as a promising platform toward the effective realization of memory and logic devices based on magnetic skyrmions.

Figure: A NV center magnetic microscopy image of magnetic skyrmion stabilized at zero external magnetic field on top of a sketch of the ultrathin film stack. The stack is composed of a Pt/Co/NiFe magnetic layer (FM) exchange coupled to an IrMn antiferromagnet (AFM). The exchange coupling with the IrMn layer leads to an effective Bint on the FM which allows the stabilization of the small skyrmions at zero field. 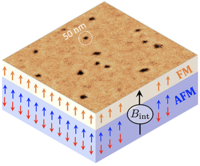