On January 29, we have the pleasure to welcome Stephane Mangin from Institut Jean Lamour, Univ. de Lorraine, Nancy, France. He will give us a seminar at 11:00, CEA/Spintec, Bat. 1005, room 434A entitled :

All-optical switching (AOS) without any magnetic field has a great potential for the future ultrafast and energy efficient magnetic memories. It was firstly demonstrated that the magnetization of a GdFeCo ferrimagnetic film can be 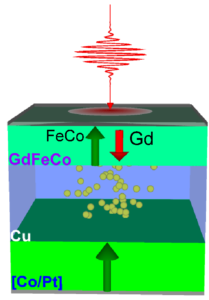 switched by a single femtosecond (fs) laser pulse [1,2]. AOS in a wide variety of materials was demonstrated recently [3,4,5], however the switching was found to be induced by multiple laser pulses. Only very recently, single pulse switching of a [Co/Pt] layer was demonstrated in an exchanged coupled GdFeCo/[Co/Pt] stack [6]. On the other hand, in spin-valve structure, ultrafast demagnetization in one ferromagnetic layer induces spin-polarized hot electron and transfer its angular momentum to the other ferromagnetic layer [7-9]. In the present study, we demonstrated that [Co/Pt] can be switched by single fs-laser pulse in GdFeCo / Cu / [Co/Pt] spin-valve structure, which is found to be mediated by spin-polarized hot electron transport. Schematic illustration of this study is shown in Fig. 1. By using magnetically uncoupled stacks, we could realize a total of four magnetic configurations (P+, P-, AP+, AP-), where P, AP represent parallel and antiparallel configuration between GdFeCo and [Co/Pt] and +, – represent positive and negative direction of [Co/Pt]. Figure 2 shows magneto-optical Kerr effect (MOKE) images after irradiation of fs-laser pulses. Starting with a saturated sample in the P+ state, we observed the switching of the both layer to the P- state around the center of the spot in addition to the 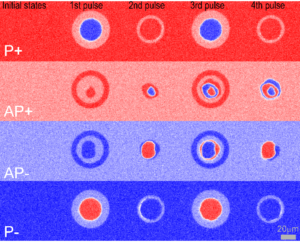 switching of only GdFeCo layer to the AP+ state around rim of the spot. Based on the studies of the sample with Pt spin scattering layer insertion, we conclude that possible explanation to reverse [Co/Pt] layer is that spin-polarized hot electrons created in GdFeCo transfer the angular momentum to [Co/Pt] [10]. The present finding will provide us a pathway to