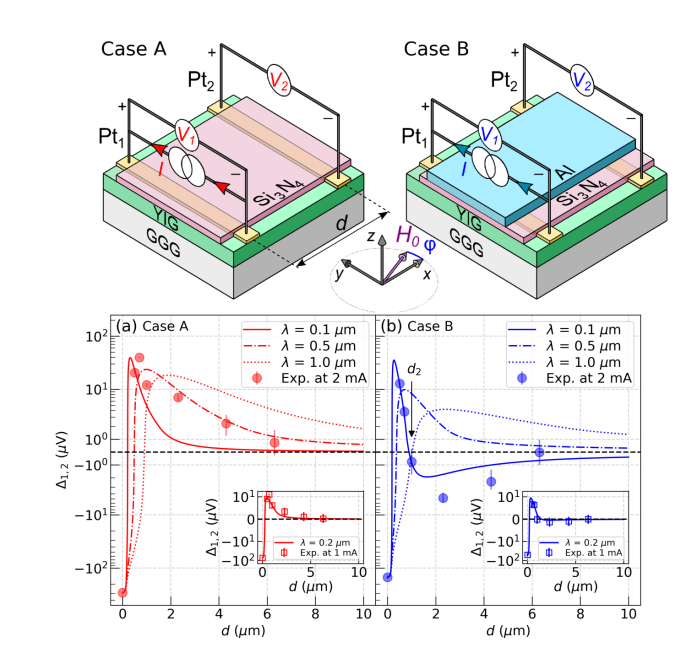 Comparison of the measurements of the local (V1) and nonlocal (V2) Spin Seebeck voltages generated in YIG|Pt|Si3N4 (case A) and (case B) YIG|Pt|Si3N4|Al stacks. The Al capping allows to change the vertical thermal gradient without altering the YIG interface. Sole a short decay length λ≈0.1µm can reproduce the measured double crossing found experimentally in (b).

The vision of spintronics is to use the spin of an electron rather than its charge to allow computers and other electronic devices to operate faster while reducing their energy consumption. Most of the devices rely on the delocalized electrons present in metallic materials to carry the spin information. It turns out that electrically insulating magnetic materials, such as yttrium iron garnet (YIG), also allow the spin to propagate between localized magnetic moments via propagating spin-waves which transmit information from an atomic site to the other without any Joule effect.

The spin transport properties are governed by λ, the characteristic decay length over which spin is conserved. Previous reports on measuring λ in YIG at room temperature by the spin Seebeck effect (SSE) indicates that in the long-range regime, the SSE signal follows an exponential decay with a characteristic length λ0 ⋍ 10µm. But, the distance range of the transport study is also a potent means to select a very specific part of the magnon spectrum, where one has in essence efficiently filtered out any short decay magnons.

In a recent experiment, a collaboration lead by Spintec has measured the spatial distribution of thermally generated magnons in the short range. We altered the temperature profile across the YIG film with an aluminum capping layer. This allows to disambiguate spin currents driven by temperature and chemical potential gradients by comparing the SSE signal before and after adding the capping on the same device. We use a linear response magnon transport theory to obtain, λ⋍0.1µm, (see Figure) which is about two orders of magnitude smaller than previous reports. Our proposed fit with a short λ captures well the short-range behavior in both cases A and B. This result does not contradict earlier works. The data observed for case A are similar to the one already observed in other YIG devices, where the fit of the long-range decay behavior has lead to the larger λ0. Our suggestion is that the long decay magnons are not thermal magnons, but instead magnetostatic magnons carrying much lower quanta of energy (∽ħγµ0H).

Behind this debate lies a fundamental issue, which suggests that magnon transport cannot be described by a diffusive model forming one gas with a single λ, whose value would govern SSE on all length scales.