A consortium led by physicists at JGU Mainz, in collaboration with CNRS/Thales Palaiseau, SPINTEC and LNCMI Grenoble, and NTNU Trondheim, demonstrated that transporting spin-information at room temperature and over long distances is within reach. They established and took advantage of two remarkable features of the insulating hematite antiferromagnet. Firstly, it can carry spin-information via current-induced pairs of linearly polarized magnons in its high-temperature easy-plane phase. Secondly, information is sustained as it moves through the material due to its record ultra-low magnetic damping. 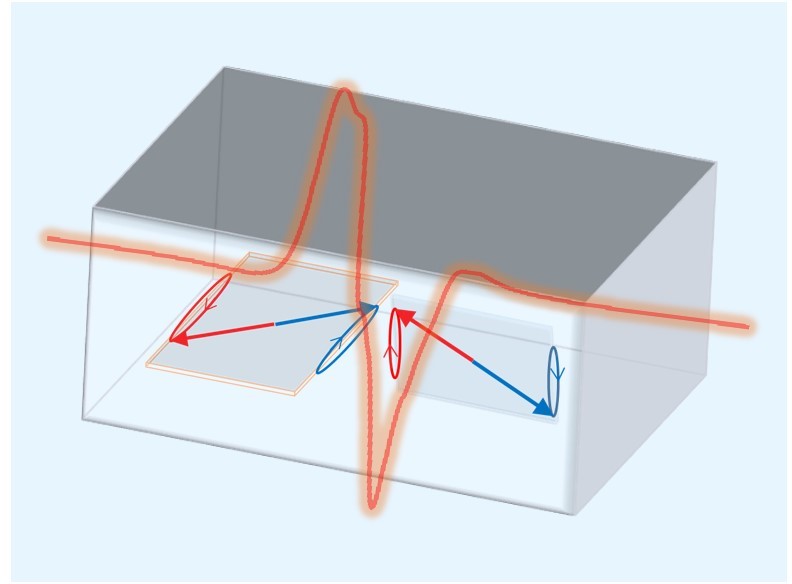 Illustration of the two linearly polarized modes in an easy-plane antiferromagnet, superimposed with a resonance absorption spectrum.

Because antiferromagnetic materials possess two magnetic sublattices, they can host pairs of spin-waves, and eventually carry spin-information suitable for data encoding. These spin-waves range from circular to linear polarizations, depending on the magnetic anisotropies in the material. Until now, only low-temperature easy-axis anisotropy antiferromagnets with circularly polarized spin-waves were reported to carry spin-information over distances of micrometers-long. Here, long-distance spin-transport was reported in the room-temperature easy-plane canted antiferromagnetic phase of hematite.

For an easy-plane anisotropy antiferromagnet, the linearly polarized spin-waves are not intuitively expected to carry spin. The mechanism at stake involves current induced pairs of linearly polarized spin-waves with dephasing lengths in the micrometer range. Basically, a pair is initially induced electrically, by spin-torque. It carries an effective circular polarization and thus a spin information. Because the two linearly polarized spin-waves constituting the pair follow two distinct dispersion laws, they ‘unpair’ (dephase) after some length. In optics, this is similar to light propagating in a birefringent material. The dephasing length is set by the relative dispersion laws. Over this length, the two spin-waves propagate separately. They do not carry spin anymore because of their independent linear polarizations.

In addition to the ability of the high-temperature easy-plane phase of hematite to carry spin, the long transport distance was explained as a result of its record low magnetic damping. In this context, SPINTEC contributed to series of experiments of antiferromagnetic resonance. Damping was measured to be smaller than 10^-5, as in the best ferromagnets. This result was made possible thanks to the remarkable capabilities of a quasi-optical bench at LNCMI-CNRS, Grenoble. This bench is suitable for antiferromagnetic resonance as it combines high-magnetic fields, high-frequencies and low-temperatures.

The findings from this study contribute to the understanding of a previously overlooked and incompletely understood effect, associated to magnonic birefringence. The results further highlight the promising potential of insulating antiferromagnets for magnon-based devices.