Advancing spintronic devices requires using novel 2D materials including graphene with featured properties. In particular, a significant effort has been focused on injecting spins and inducing magnetism in graphene giving rise to emerging field of graphene spintronics. It is demonstrated that robust spin polarization can be induced in graphene via proximity with magnetic insulators including yttrium iron garnet (YIG) and europium chalcogenides.

Graphene stands as a potential spin-channel material. There is, however, a fundamental challenge in the development of external ways to control the propagation of spin currents at room temperature, in view of designing novel spintronic devices. Since carbon is non-magnetic, a significant effort is focused on injecting spins and inducing magnetism in graphene. It can be induced and controlled using defects or by putting it at the interface with magnetic materials. The most promising is the use of magnetic insulators (MIs) as an alternative route to induce magnetism in graphene via the exchange-proximity interaction.
In this work, using first-principles calculations, the impact of the nature of the magnetic insulators on the magnetic proximity effect induced in graphene is elucidated. Four cases of different magnetic insulators were studied: europium oxide (EuO), europium sulfite (EuS), cobalt ferrite CoFe2O4 (CFO) as well as yttrium iron garnet Y3Fe5O12 (YIG) [Fig. 1]. The proximity induced exchange-splitting parameters were obtained from the band structure of graphene calculated in each case. Electron doping occurs for all cases except the CFO where the Dirac point lies about 0.5 eV above the Fermi level. The magnetic proximity effect results in a large and robust to MI thickness variation exchange-splitting parameter of a few tens of meV. The presence of spin-dependent band gaps around Dirac point was found in all cases, except for CFO.
These findings pave the way towards possible engineering of graphene spin-gating by proximity effect especially in view of recent progress in experiments. 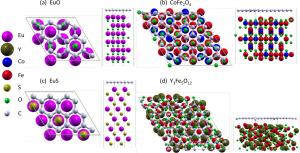 Fig. 1. Side view and top view of the calculated crystalline structures for graphene on top of (a) EuO film (b) CoFe2O4(C) EuS (d) Y3Fe5O12.

This work received funding from the European Union’s Horizon 2020 research and innovation program GRAPHENE FLAGSHIP under grant agreement No. 696656.