We report a theoretical overview of the magnetic domain wall behavior under an electric current in infinitely long nanotubes with azimuthal magnetization. We highlight effects that, besides spin-transfer torques already largely understood in flat strips, arise specifically in the tubular geometry: the Œrsted field and curvature-induced magnetic anisotropy resulting both from the exchange interaction and material growth. 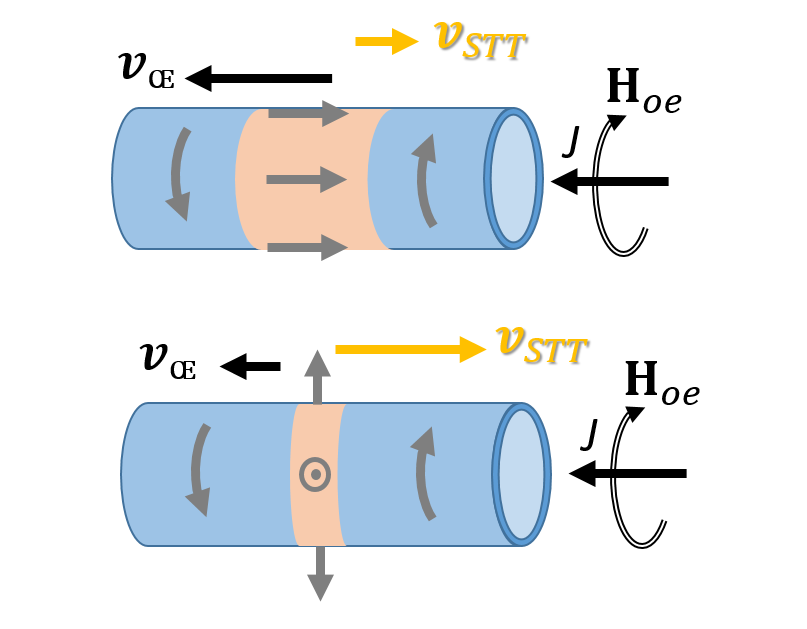 Sketch of the domain wall in a nanotube subjected to the electron current. According to intrinsic tube properties, favoring a particular domain wall type, the domain wall dynamics is dominated either by the Oersted filed or by the spin-transfer torque.

While magnetic nanowires and nanotubes have been synthesized and investigated for three decades, it is only recently that their properties are being monitored at the scale of single objects, such as for instance domain wall motion. Recently very peculiar class of domains were observed in 30 µm CoNiB nanotubes – domains with azimuthal (flux-closure) magnetization. This peculiar magnetization orientation in long tubes have been attributed to possible two sources of magnetic anisotropy: intergranular interface anisotropy and magneto-elastic coupling (inverse magnetostriction). Interestingly, it opens the possibility of moving those structures with only electric currents, via the Oersted field, at very high speed.

To this end, we perform a theoretical and numerical study on the current induced domain wall dynamics in magnetic tubes with azimuthal domains focusing particularly on the effect of the Oersted field and spin-torque-induced effects. We combine theory based on an analytical 1D model to draw trends and highlights the physics at play, with micromagnetic simulations for an accurate description. We establish a phase diagram where stable azimuthal domains are predicted as a function of the anisotropy strength K and the tube geometry. In addition, stable Néel and Bloch wall structures (see figure) are predicted resulting of a competition between the curvature induced exchange energy, the demagnetization energy and the anisotropy energy. We show the existence of spin-transfer torque and/or Oersted dominated regime for both domain wall structure and we report large domain wall speeds reaching potentially 800 m/s and the presence of a so-called Walker breakdown. We pay particular attention to features which are analogous to flat strips, and which are specific to tubes. For example, we show how the domain wall speed and the Walker field depend on the anisotropy and the geometrical parameter of the magnetic tubes. Our study may guide the experimental realization of magnetic tubes for finding the optimal parameters to get the desired properties.