We present experimental evidence for coherent long-distance transport of angular momentum inside a non-magnetic dielectric via the coupling to circularly polarized sound waves that exceeds previous benchmarks set by magnon diffusion by orders of magnitude.

The vision of spintronics is to use the spin of an electron rather than its charge to allow computers and other electronic devices to operate faster while reducing their energy consumption. Most of the devices nevertheless rely on the delocalized electrons present in metallic materials to carry the spin information, which induces loss by Joule heating. It turns out that electrically insulating magnetic materials, such as yttrium iron garnet (YIG), also allow the spin to propagate between localized magnetic moments via propagating spin-waves which transmit information from an atomic site to the other without any Joule effect. In principle, the induced angular momentum can also pass through a non-magnetic insulators by coupling to circular vibrations of the crystal lattice called chiral phonons. But the extent to which these phonons can mediate spin currents in a circuit remains to be demonstrated. In a recent experiment [1], a collaboration lead by researchers at Spintec used a microwave field to excite a current of chiral phonons through a half-millimeter thick layer of non-magnetic gadolinium gallium garnet sandwiched between two YIG films. By showing interference effects between the two magnetic layers, they demonstrated that circularly polarized acoustic phonons allow coherent transmission of spin information over millimeter distances.

This work has since inspired theoretical work [2] showing the interest of using this discovery with an electric current which is more practical for powering spintronic devices. 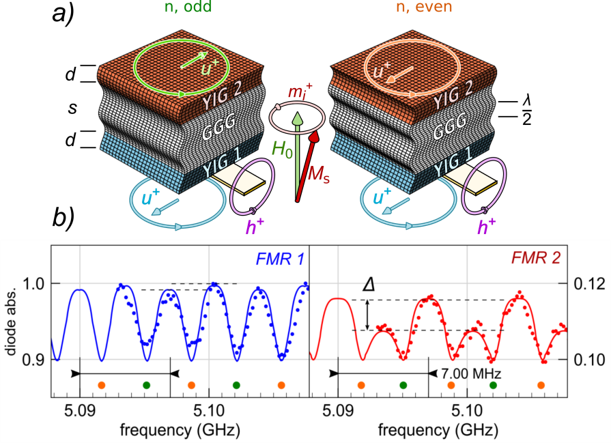 Figure: a) Schematic diagram of the dynamic coupling between two magnetic YIG layers: the magnetic precession m+ generates a circular shear deformation u+ of the crystal lattice that can be tuned into a coherent motion of all fields causing constructive or destructive interference patterns. b) The signature is a contrast Δ in the ferromagnetic resonance signal between tones separated by half a phonon wavelength. The orange/green dots indicate the spectral position of the even/odd acoustic resonances.