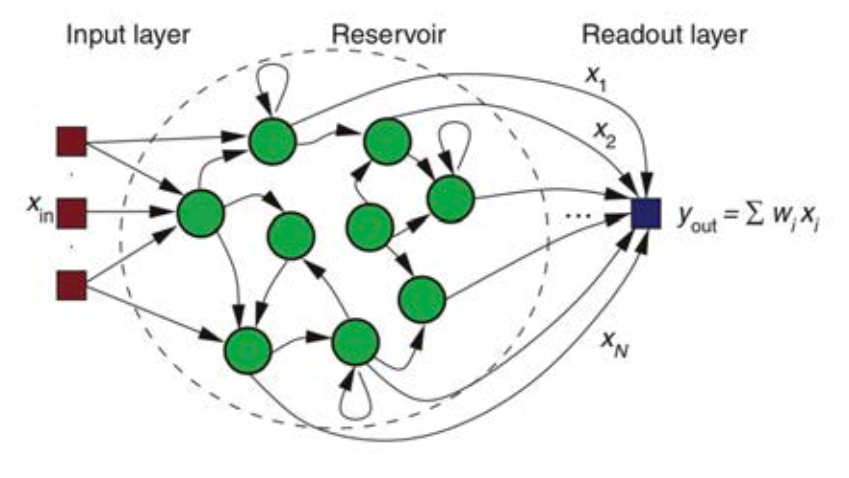 MARIN stands for Magnon Reservoir computINg. It is a 42 months researcher project funded by the French ANR.

MARIN aims at showing that spin waves can be used in the field of “wave-computing” where oscillatory signals are proposed to perform analog non-Boolean operations such as reservoir computing (see Figure). The MARIN project will investigate experimentally and theoretically the capacity of SWs in micro- and nanostructured thin films to satisfy the three basic requirements of reservoir computing, namely: (i) approximation – whether similar inputs result in similar outputs; (ii) separability – whether distinct input classes result in distinct output classes; and (iii) fading memory – how quickly inputs are forgotten over time. The basic control mechanism is the nonlinear coupling between SWs, which allows orthogonal eigenmodes of the equilibrium state to interact with each other as their amplitudes increase. This will be applied to demonstrate advanced signal recognition on time-series, as a first step towards a proof-of-concepts. Two different realisations are proposed: (i) a spectral analyser which performs an on-chip spin-wave Fourier transformation and (ii) a classifier of waves which as a first goal will be designed to sort sine from square waves in the GHz regime. This will allow for a new hardware implementation of reservoir computing that relies on the liquid state machine concept at GHz frequencies, which could be useful for processing telecommunications signals.