Spintec > PUBLICATIONS > Comparison of the use of NiFe and CoFe as electrodes for metallic lateral spin valves
2D AND SEMICONDUCTOR SPINTRONICS, Instrumentation, Nanofabrication, PUBLICATIONS, TOPOLOGICAL SPINTRONICS

A CoFe based ferromagnetic alloy has been used in lateral spin valves to replace NiFe alloys, which are overwhelmingly exploited as ferromagnets electrodes in lateral spintronic devices. By using this second material, emitted signals are found to be one order of magnitude larger. 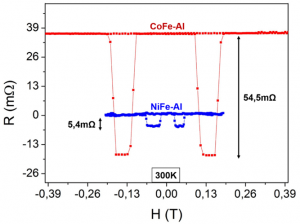 In addition to using the electric charge of the electron, spintronic technologies also manipulates the spin of electrons to handle data processing. Most of the applications based on magnetoresistance effects, such as hard disk drive read-head or MRAM, are based on multilayers composed of stacks alternating ferromagnetic and non-magnetic layers. The interest of multilayers is that the layer thicknesses can become smaller than typical lengths of the spin-dependent electronic transport. Thanks to progresses in the nanofabrication processes, it is now possible to create similar devices with an in-plane geometry, by patterning small heterostructures. These in-plane structures, named ‘lateral’ devices, open the path to new functionalities. Nevertheless, emitted signals on such devices are too low to be technologically applicable.
The replacement of NiFe by CoFe allows obtaining signals up to ten times larger. This result, along with other recent experiments, suggest that laterally shaped spintronic devices could be used for hard disk drives read-heads.
This study has been performed within the Spintec laboratory. The different steps of nanofabrication were performed in the cleanroom Platerforme Technologique Amont, CEA.