Electric field control of magnetic properties has been of major interest for future generations of energy efficient applications. One of the promising routes towards efficient control of magnetism may be provided by voltage-driven ionic motion (magneto-ionics) either in magnetic layered structures comprising transition metals (Co, Fe…) and oxides (GdOx, HfOx, MgO…), or structural oxygen motion in already oxidized materials (e.g. CoOx etc.) However, there are a few major drawbacks limiting their potential use in practical devices due to an inherent voltage trade-off between induced magnetization, speed and cyclability. 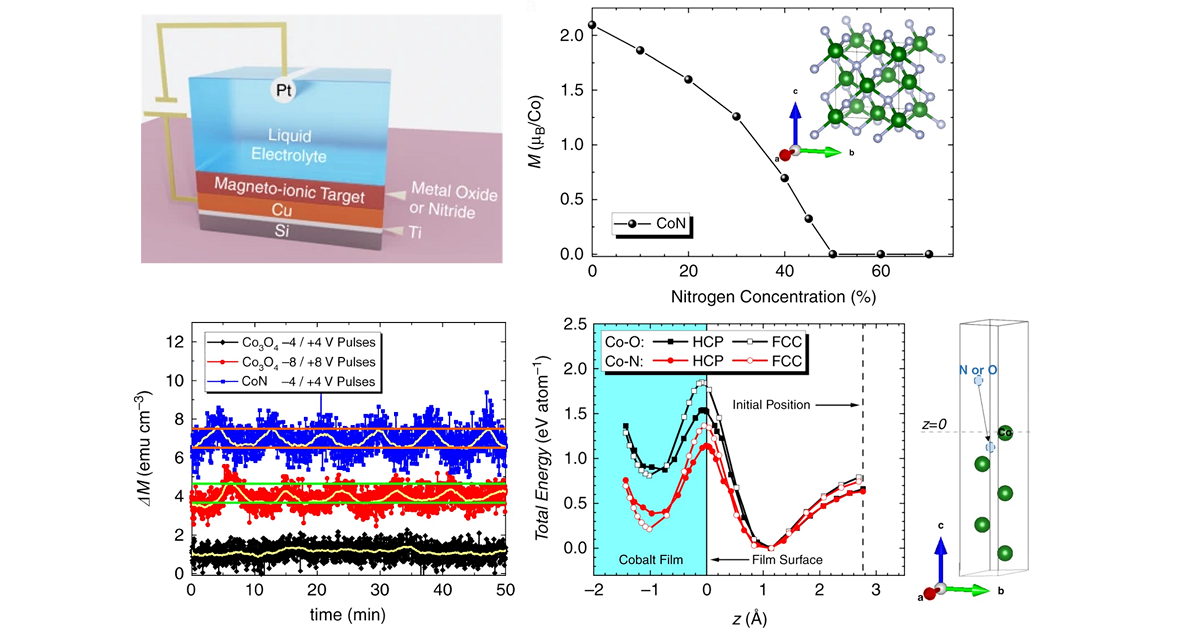 Schematic representation (top left) and magneto-ionic cyclability measurements (bottom left) of the electrolyte-gating process in the Co3O4 and CoN films subjected to voltage pulses. Calculated variation of magnetic moment per Co atom as a function of increasing the N percentage in the CoN unit cell (top right) and total energy per atom, normalized to the minimum energy value, as a function of the displacement between the reference Co outermost surface atom and the inserted O or N atom (bottom right).

In this work, nitrogen magneto-ionics is demonstrated as an improved alternative to oxygen magneto-ionics. Namely, CoN and Co3O4 single-layer films grown by sputtering were voltage-actuated to compare nitrogen vs. oxygen magneto-ionic performances. Remarkably, voltage-driven transport of structural nitrogen is found both experimentally and theoretically to be energetically more favorable than oxygen, resulting in lower operating voltages and enhanced cyclability [see Figure]. Moreover, the magneto-ionic rates are faster than for oxygen magneto-ionics. Controlled motion of nitrogen ions with voltage might enable the use of magneto-ionics in new technological areas that require endurance and moderate operation speeds (e.g., neuromorphic computing or micro-electro-mechanical systems).