This study discuss the shift observed in spintronics from the current-perpendicular-to-plane geometry towards lateral geometries, illustrating the new opportunities offered by this configuration.

The possibility to combine ultrathin magnetic and non-magnetic layers allowed creating hetero-structures whose dimensions are smaller than the characteristic lengths of the spin-dependent transport. This has notably led to the discovery of the Giant Magnetoresistance (GMR), and to the development of transport experiments in the current-perpendicular to the plane (CPP) geometry.

Recent progresses in lithography techniques have enabled the creation of lateral nanodevices in which the lateral dimensions become smaller than physical lengths such as the spin diffusion length. Thus, the effects usually observed in current-perpendicular-to-the-plane configurations can be nowadays observed in lateral devices. 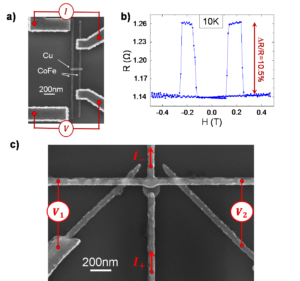 a) SEM image of a CoFe-based lateral spin valve, with the electrical setup for GMR measurements. b) Corresponding GMR measurement at 10K. a) SEM image of a setup allowing to detect the orientation of the magnetization direction of a CoFe nanodisk. The current is injected through the nanodisk, while two non-local detector are measuring the non-local spin signal V_1 and V_2.

Furthermore, we studied a new device in which the magnetization direction of a nanodisk can be detected (cf. fig. c). We thus show that the ability to control the magnetic properties can be used to take advantage of all the spin degrees of freedom, which are usually occulted in current-perpendicular-to-plane devices.

Spin signals obtained in purely metallic nanostructures can thus compete with CPP GMR. Beyond that point, the flexibility of lateral structures, relatively to current-perpendicular-to-the-plane structures, can be combined to the use of spin-orbit effects to create and detect spin accumulations, and to the use of spin-transfer torques to switch magnetizations. It thus offers a new playground for the development of spintronic applications.