Layered magnetic topological insulators are candidate to unveil novel electronic phases controlled by the magnetization. In MnBi4Te7, we evidenced a transition from an antiferromagnetic to a ferromagnetic-like metamagnetic state, possibly realizing the quantum anomalous Hall regime in ultra-thin films above 1K.

3D topological insulators ideally have an insulating bulk and 2D gapless topological surface states (TSS). In magnetic materials, time-reversal symmetry is broken by the internal exchange field, so that an energy gap opens for TSS, resulting in novel topological states. For a homogenous magnetization, it realizes a Chern insulator or the quantum anomalous Hall state (QAH), with dissipationless spin-polarized transport at edges, or a Weyl semimetal phase. For complex magnetic structures, additional symmetries can generate other topological states. Antiferromagnets are thus candidates to realize the axion insulator phase. In general, the magnetization becomes an easily tunable parameter with some potential to modify topological electronic phases by applying small external magnetic fields.
Recently, van der Waals multilayers of 2D ferromagnets have raised specific interest, with the possibility of tailoring exchange-coupled magnets having a nontrivial band structure. A unique example is the so-called MBT family, [MnBi2Te4][Bi2Te3]n with the integer n ≥ 0, realizing stoichiometric magnetic topological insulators. The magnetic base unit, a MnBi2Te4 septuple layer, is a 2D ferromagnet with a perpendicular anisotropy KU that stabilizes an out-of-plane ferromagnetic order and generates the QAH state. Stacks of septuple layers form the MnBi2Te4 compound, with an antiferromagnetic interlayer coupling leading to 3D antiferromagnetic order. Other compounds have n units of the nonmagnetic Bi2Te3 spacer in between 2D ferromagnetic layers, and therefore a reduced interlayer exchange coupling.
We studied the magnetic properties of the MnBi4Te7 compound (n=1) by magnetotransport measurements. We evidenced that the relative strength of the interlayer exchange coupling to the uniaxial anisotropy KU controls a transition from an A-type antiferromagnetic order to a ferromagnetic-like metamagnetic state. A bilayer Stoner-Wohlfarth model describes this evolution, as well as the typical angular dependence of specific signatures, such as the spin-flop transition of the uniaxial antiferromagnet and the switching field of the metamagnet. This result is important to search for new classes of topological materials, in particular to observe the QAH phase above 1K, which requires to control the micromagnetic configuration of thin films. Thanks to its versatile magnetic and electronic properties, the MBT family is a unique material platform for the realization of tunable topological quantum phenomena with spin-textured quasiparticles.

Figure: Transition from antiferro- to meta-magnetism in a van-der-Waals layered magnetic topological insulator MnBi4Te7, a candidate to realize novel topological states (QAH, Axion insulator) at liquid-Helium temperatures. In the fully-saturated magnetization state, charge transport is ideally only due to spin-polarized ballistic edge states. 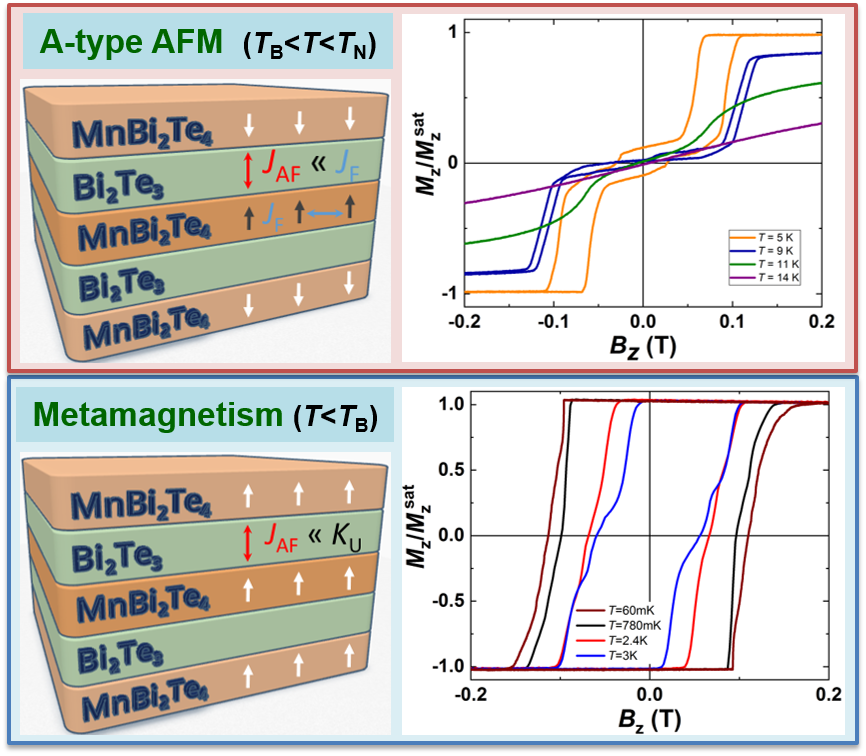