Nanotweezers and their remote actuation by magnetic fields

We have developed arrays of innovative magnetic nanotweezers or “nanojaws” on silicon wafers, by a top-down approach using the fabrication techniques of microelectronics.

The mechanical manipulation of micro- and nanometric objects relies on constantly evolving techniques, which are of great interest to the life sciences and biotechnologies. Numerous biomedical studies, either fundamental or applied to medical diagnosis and treatment, are concerned with the application of locally controlled forces to seize and capture microscopic biological samples. For example, to take a sample of biological tissue for biopsy; catch bacteria; pinch cancer cells to destroy or analyze them; sample viruses, biomolecules or DNA strands, and so on.

Many among all the devices for micromanipulation are using magnetic particles, whose advantage is the ability to be remotely actuated by the application of an external magnetic field. Some current macroscopic systems perform the function of magnetic clamps, for example to study DNA elasticity by pulling the strand by means of a grafted magnetic particle. This type of method is however limited to single sample manipulations.

Our study, published recently in Scientific Report [1], presents the first realization of arrays of a new type of magnetic nano-tweezers remotely actuated by an applied magnetic field. A top-down approach has been developed to produce at once millions of sub-micrometric clamps. The clamps are formed of two anisotropic magnetic particles connected by a hinge of nanometric thickness (FIG. 1). 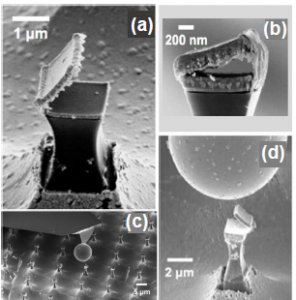 Their operating principle rests on the balance between the interaction with the applied field, the magnetostatic interaction between the two magnetic jaws (attractive in zero field – repulsive in sufficiently large field), and the restoring force exerted by the hinge. The correct operation of these clamps has been demonstrated in a SEM with a local magnetic field created in situ by a permanent magnet microsphere. The clamps studied up to now were still attached to the substrate, although the manufacturing process makes it possible to envisage their dispersion and use when released in a liquid. Designed to pinch objects with sizes comparable to their own, nano-tweezers could then act collectively on biological samples or other types of micro-nanometric elements.

The fabrication process has been developed at PTA (Plate-forme Technologique Amont). This study has been supported by the Nano-Shark P2N ANR project (ANR-11-NANO-001).