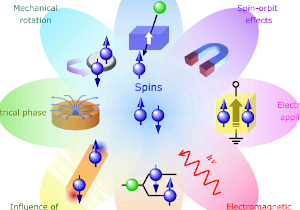 Spintronics is one of the emerging fields for the next-generation nanoelectronic devices to reduce their power consumption and to increase their memory and processing capabilities.

Such devices utilise the spin degree of freedom of electrons and/or holes, which can also interact with their orbital moments. In these devices, the spin polarisation is controlled either by magnetic layers used as spin-polarisers or analysers or via spin–orbit coupling. Spin waves can also be used to carry spin current. In this review, the fundamental physics of these phenomena is described first with respect to the spin generation methods as detailed in Sections 2-9. The recent development in their device applications then follows in Sections 10 and 11. Future perspectives are provided at the end.