The generation of a spin current and its further conversion to a charge current have attracted considerable attention, facilitating advances in basic physics along with the emergence of closely related applications in the field of spintronics. In this study, we experimentally and theoretically demonstrated the self-induced inverse spin Hall effect for spin-charge conversion, triggered by spin-orbit interactions in ferromagnets. The results presented open a new pathway for the investigation of spin-orbit-related effects in materials for spintronics, while also advancing progress toward efficient spin-charge converters.

An electrical current can be converted to a spin current and vice versa as a result of the spin-orbit interaction (SOI), which links the spin and the orbital angular momentum of an electron. One of the related effects of this phenomenon, known as the inverse spin Hall effect (ISHE), is commonly used to study SOI in non-magnetic materials (NM) inserted into archetypal F/NM bilayers. In some of these studies, a spin current is pumped from the ferromagnetic (F) spin-injector at resonance, and the ISHE ensures spin-charge conversion in the NM. The contribution of the F to spin-charge conversion can be difficult to distinguish from that of the NM, and spin-charge conversion arising from the F is frequently neglected in experiments.

The main contribution of our work is that it presents systematic evidence of a self-induced ISHE. The findings were supported by distinct sets of temperature-, thickness-, angular-, and stack-dependent experimental data encompassing the main features of the self-induced ISHE. The experimental findings were corroborated by first-principle calculations. Most importantly, similar amplitudes but opposite signs for the bulk skew scattering and the side-jump plus intrinsic contributions to the temperature-dependent spin Hall conductivity in permalloy could explain why the SOI-related transverse signal was observed to display non-monotonous temperature-dependence. Interestingly, similar sets of experimental data were obtained whatever the material in contact with the permalloy layer: SiO2, MgO, AlOx oxides, Cu, and Pt metals. This observation further confirmed the bulk origin of the effect. Insights on the direction of the self-induced current were obtained by addition of a reference layer of Pt to the stack, either as a buffer or as a capping layer.

The findings from this study contribute to our understanding of a previously overlooked and incompletely understood effect. The results further indicate that self-induced conversion within the F can be as efficient as that recorded with noble metals such as Pt, and thus needs to be carefully considered when investigating SO-related effects in materials destined for use in spintronics. 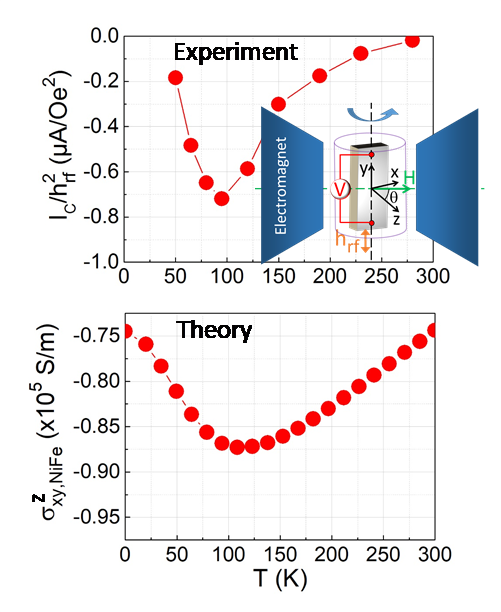