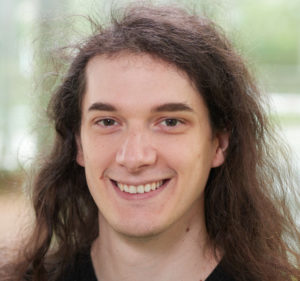 On Tuesday, November 16th at 13:30 Richard Schlitz from Magnetism and Interface Physics, ETH Zürich, Switzerland will give us a seminar entitled:
Topological transverse transport effects and non-local magnon spin transport

Abstract: In the first part of the seminar, I will discuss the magnetotransport response in systems with a non-trivial magnetic topology. In such systems, topological transport signals like the topological Hall and topological Nernst effect can serve as indicators for such a non-trivial magnetic topology [1]. Conventionally, the topological response is determined by combining magnetotransport data with independent magnetometry experiments. This approach is prone to introduce measurement artifacts, particularly in nanopatterned materials. I will report on the observation of large topological Hall and Nernst effects in micropatterned thin films of Mn1.8PtSn below its spin reorientation temperature TSR ≈ 190 K. Our data can be used as a model system, allowing to calculate a so-called topological quantity. With this topological quantity, the detection of topological transport effects without the need for independent magnetometry data is possible [2].
The second part of this seminar on the other hand will be dedicated to one of the key research topics in the field of magnonics, which is the study of electrically generated and detected magnon spin currents in heterostructures consisting of a magnetic insulator and a heavy metal. It was shown that in such structures, the investigation of spin transport via magnon diffusion is possible by electrical transport measurements [3]. To realize the full potential of this branch of magnonics, however, the absence of the magnon equivalent of an electric force is a significant obstacle.
I will first revisit the key features of the non-local spin transport using the example of the prototypical system – heterostructures of yttrium iron garnet and platinum. In the following, results on the controlled generation of magnon drift currents will be presented. In our experiments, we relied on the electrical injection and detection of incoherent magnons to reveal magnon drift currents that stem from the odd contribution of the interfacial Dzyaloshinskii- Moriya interaction to the magnon dispersion. By changing the orientation of the magnetic field, we can direct the magnon drift. A maximum change of the magnon propagation length by up to ±6% relative to diffusion can be achieved. We find good agreement between experiments and an extended spin transport theory which includes a finite drift velocity resulting from any inversion asymmetric interaction [4].