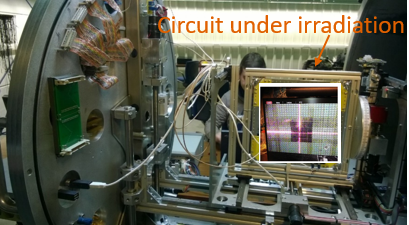 Vacuum chamber at UCL Cyclotron Facilities. The picture also shows the heavy ion centered beam (violet cross) on the circuit during the irradiation.

Designers of space systems have to deal with ensuring complex data processing, while obtaining, at the same time, a proper level of radiation tolerance, a reduced payload size, weight, and power (SWaP) as well as a competitive price. Moreover, they are usually reluctant to use devices without significant space heritage that ensures predictable behavior. In trying to create a harsh environment performance database for emerging devices, a considerable amount of research has been carried out in the exploration of technologies that aim to ensure a radiation tolerance higher than transistors in integrated circuits. For these motivations, perpendicular magnetic anisotropy STT devices represent today the most advanced and promising technology to achieve high-density (over 1 Gb of memory capacity) application in harsh environment. In order to test the effects of heavy ion, a test campaign was organized. This radiative campaign took place at the Cyclotron of Université Catholique de Louvain (UCL) facilities. The considered devices consist of p-STT-MTJs being purely magnetic memories. They were fabricated at SPINTEC using the most advanced CoFeB-MgO-CoFeB process. Single-event upset (SEU) tolerance and modification of magnetic properties have been investigated. The irradiation of the multilayer structure with 995-MeV 124Xe35+ ion indicates a negligible Single Event Effect (SEE) sensitivity nor detrimental effect of statistical significance on electrical properties. Instead, the TMR is slightly increased in the lowest half of the InterQuartile Range (IQR), suggesting an annealing-like effect on the MgO crystallinity. Concerning the magnetic properties, a general reduction in the coercive field involved in the AP to P switching, combined with an increase of the offset field have been detected. Depending on the intensity of these phenomena, write operations stability could be threatened by the observed hysteresis loop degradation due to the reduced stability of the AP state. This drift could likely be symptomatic of degradation mechanisms that take place in the device stack such as thermally activated diffusion of Ru and Ta, the formation of pinholes in the Ru Synthetic Anti Ferromagnetic (SAF) spacer and the miscibility of Co/Pl SAF multilayer. Indeed, the large quantity of affected MTJs could not be entirely related to direct ion strike occurrences. Since the limited fluence reached during the irradiation experiment, and the lack of high-density MTJ matrix in the irradiated circuits, another mechanism, most likely a thermal effect, could have induced the observed degradation. Hence, heavy-ion irradiation may affect MTJs also by thermally activated and thermal-induced effects rather than exclusively direct ion strike. Modifications to magnetic properties occur before degradation of electric properties.