Measurement of the Spin Absorption Anisotropy in Lateral Spin Valves

The spin absorption process in a ferromagnetic material depends on the spin orientation relatively to the magnetization. Using a ferromagnet to absorb the pure spin current created within a lateral spin valve, we evidence and quantify a sizable orientation dependence of the spin absorption in Co, CoFe, and NiFe. These experiments allow us to determine the spin-mixing conductance, an elusive but fundamental parameter of the spin-dependent transport. 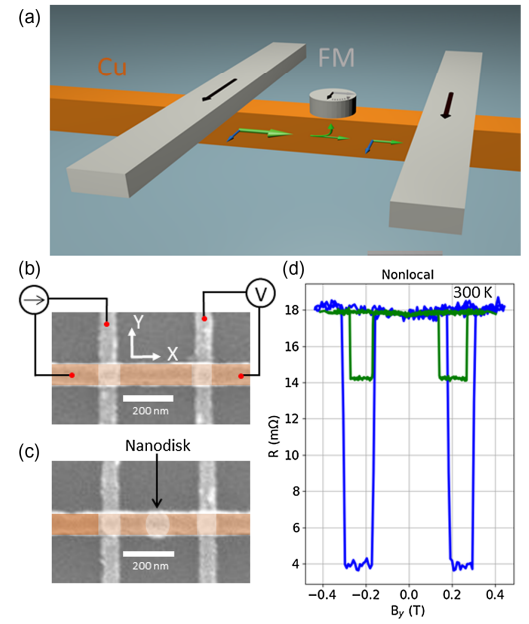 Spin-orbitronics studies the spin-to charge interconversion. Most of the technique used in this field relies on non-collinear spin transport into ferromagnetic materials in order to detect or generate a spin current. The interaction of the spin current with a ferromagnet that possesses a magnetization transverse to the spin current’s polarization is governed by the spin mixing conductance. This quantity is therefore of fundamental interest in order to evaluate the efficiency of the spin to charge interconversion.

However, the evaluation of such a quantity has proven difficult in available measurement techniques like FMR and Spin-Hall Magnetoresistance, because of the presence of parasitic effects such as the two magnons scattering at GHz frequencies, and the presence of a charge current in the system. These spurious contributions can be avoided by using pure spin currents in a d.c. electrical measurement. Using lateral spin valves we generated a pure spin current flowing between two ferromagnetic electrodes. A nanodisk is placed between the two electrodes and absorbs a part of the spin current, thus reducing the measured signal with respect to a lateral spin valve without absorber. Due to its shape anisotropy, the magnetization of the absorber was rotated in a direction transverse and parallel to the polarization of the spin current. We then measured the difference in absorption efficiency between these transverse and parallel configurations. Using discrete numerical simulations we extracted the spin mixing conductance at the interface between copper and 3d materials. Our results confirm that the relaxation efficiency of the spin current into a ferromagnet is higher when its magnetization is transverse to the spin current polarization. Furthermore, our results are in line with ab initio calculation, showing a very strong spin relaxation efficiency in 3d ferromagnets, only limited by the finite number of conductions channel in copper, giving a finite Sharvin conductance at the interface between copper and 3d ferromagnets.

Our results confirm the possibility to design nanodevices with a non-collinear geometry, allowing us to move toward the study of magnetization dependent Spin Hall Effect in ferromagnetic materials.